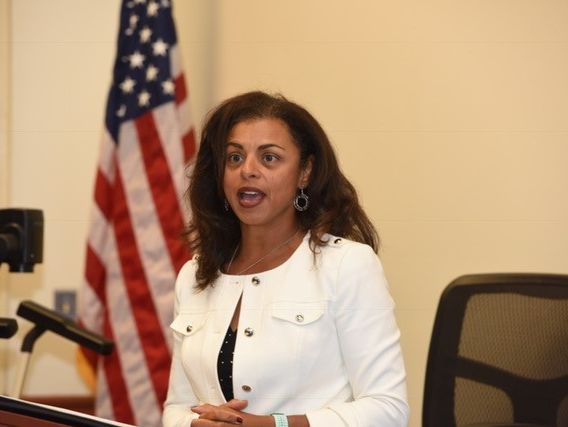 Townsend noted that in 2018, Camden County has seen 181 narcotic-related deaths, compared with 227 in all of 2017. Police in the county County have deployed naloxone, the opiate overdose antidote also known by its brand name Narcan, 480 times — an alarmingly high number that doesn’t include deployments by EMS personnel, hospitals or individuals in private settings, he noted.

Though police have had to deal with a number of drug problems over the years, from psychedelics in the 1960s to crack cocaine in the 1980s and ’90s, he said, “no one, at least in law enforcement, was prepared for the opiate epidemic.”

“We’ve had to completely change our mindset,” he acknowledged. “We were always trained: See a violation, make an arrest, get them into the system. But we recognize now the system is not perfect and arrest is not going to deter anything.”

Townsend, county Freeholder Director Lou Cappelli, Assistant Prosecutor Nevan Soumilas and Gloucester Township Police Capt. Brendan Barton all talked about how law enforcement attitudes toward those suffering from addiction have evolved. All four emphasized the need for more empathy and understanding, with a shift away from punishment and toward prevention, intervention and treatment.

Townsend and Cappelli highlighted the work of the county Addiction Awareness Task Force, which had several of its members in attendance. Patty DiRenzo, a Blackwood resident who lost her son Sal to an overdose, was cited for her role in the passage of the Overdose Protection Act, which enables drug users to call for help in the event of an overdose without fear of prosecution.

One pressing need, Cappelli acknowledged, is more detox beds for those who need treatment. The county is working to add more of those beds and hopes to do so by the end of the year.

Project SAVE — Substance Abuse Victim Effort — offers treatment and close monitoring in lieu of incarceration for people charged with drug-related, nonviolent crimes like shoplifting and robbery. Capelli said the county is working to bring the program from Gloucester Township’s specialized drug courts to other municipalities as well.

Soumilas spoke about the limitations and challenges of strict-liability laws, which enable prosecutors to charge those who provide overdose victims with the drugs that lead to their death.

Lt. Bob Ferris, Sgt. Carlos Plaza and Detective Shane Morgan of the prosecutor’s office offered a tutorial in the economics of the heroin trade, highlighting why the deadly synthetic drug fentanyl is often used to cut heroin before it hits the streets.

Fentanyl, whose potency is often sought by addicts desperate for a purer high, is especially dangerous for law enforcement officers who might come in contact with it, they explained.

The forum “answered so many questions for me,” said Sharon Robinson, pastor of New Jerusalem Temple in West Collingswood. “But it filled me with many more.”

She noted churches play a crucial role in providing people struggling with addiction a place where they can receive hope and help in a nonjudgmental setting.

“What I loved about this is how they talked about treating addicts as a person, as a human being,” Robinson said.

“This was enlightening, informative and necessary,” said Jim Peeler, a retired teacher from Cherry Hill. Addiction has affected his family, he said, and he hoped there would be more outreach within the community.

“You have to show the person who’s addicted that there is help out there, not just from the county or the state, but right in their community,” Peeler said.

Dispelling the myth of drug addiction as an urban problem or one that only affects people of color has helped bring more empathy, he said, but as suburbanites go into places like Camden to buy drugs, it damages perceptions of the city and its residents.