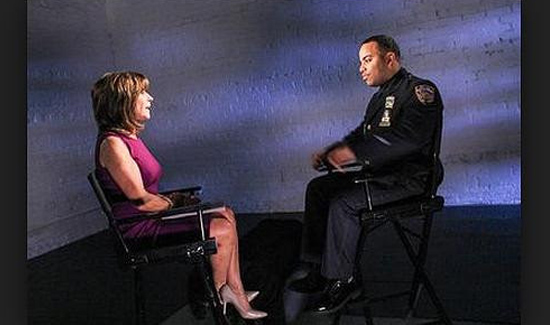 You won’t want to miss the second installment of “In the Line of Fire,” presented by Rikki Klieman, a legal analyst and former trial attorney who is married to NYPD Commissioner Bill Bratton.

In celebration of National Police Week (Sunday, May 15-Saturday, May 21), “In the Line of Fire” is set to premiere exclusively on ID on Sunday, May 15 at 8/7c.

Scroll down to see videos of two of the officers whose stories will be told on Sunday night.

Across the United States every day, brave men and women in blue risk their lives to serve and protect all Americans. For the second year, Investigation Discovery (ID) turns its cameras on the professionals to explore the critical role so many officers play in protecting and serving.

Presented by legal analyst Rikki Klieman, “In the Line of Fire” brings viewers into the heat of the moment to experience the stunning split-second decisions that changed the course of events and tells, first-hand, emotional stories of survival from the police officers themselves.

“With daily headlines denouncing the negative and harmful acts of law enforcement, I feel it’s my duty to provide viewers with the stories of the overwhelming majority of the professionals who are decent, ethical and courageous,” said Klieman. “These are the men and women in blue who answer the call to protect and serve, and it is my honor to tell their stories.”

“In the Line of Fire” follows Klieman as she travels coast to coast to uncover the dangers officers face every day in varied circumstances and the split second decisions that change lives. The stories featured this year include:

Officer Ann Carrizales is described by everyone in her hometown of Stafford, Texas as a super mom, super wife and super cop. No stranger to tough situations, Carrizales was a former military police officer in the U.S. Marines, and the first woman on the Marine Corp boxing team. Three years ago, during a routine traffic stop, Carrizales approached a car with three men inside when one opened fire, striking her once in the face and again in the chest. Despite her injuries, Carrizales pursued the men in a 20-mile chase.

A domestic dispute turns into a violent gun battle as now-retired Officer Keith Borders does everything he can to shield an innocent woman. Borders responds to the call in the middle of the night without backup, and gunfight ensues that lasts for more than 20 minutes and leaves the perpetrator dead.

Officer Juan Pichardo, New York Police Department
Off-duty police officer Juan Pichardo was working at his family’s car dealership when two men come in demanding money. The men tie up the officer along with two other hostages. Pichardo breaks free of ties and is able to wrestle the suspects for their gun. During an intense struggle, Pichardo is shot in the leg, but holds down one of the robbers until help arrives.

About Rikki Klieman
Television anchor, legal analyst, trial attorney, actress and best-selling author, Rikki Klieman has earned a sterling reputation as one of the nation’s most celebrated lawyers and legal authorities. A dynamic and versatile communicator, Klieman found success in multiple fields, including television journalism, the courtroom, academia, and public speaking.

Klieman is currently a contributor and legal analyst for CBS News. Previously, she was an anchor at Court TV, later Tru TV, and has been a contributor to the CBS Early Show, NBC’s Today Show and E! Network. She has appeared as a legal analyst on NBC’s Nightly News, CBS Evening News, ABC, CNN, CNBC and MSNBC, and was named by TIME Magazine as one of the top five female trial lawyers in the country. She also authored her autobiography, “Fairy Tales Can Come True – How a Driven Woman Changed Her Destiny,” which reached the Los Angeles Times Best Seller List.