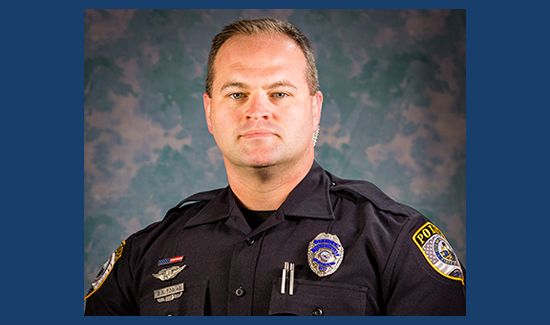 A spokesman for the Gainesville, FL, police department is not impressed by President Trump‘s recent remarks where he seemed to give law enforcement permission to rough up suspects they place under arrest.

Ben Tobias (pictured above) spoke with CNN’s Erin Burnett, who asked him to react to Sarah Huckabee Sanders as she downplayed Trump’s comments earlier today. Tobias said Trump’s “police brutality” remarks were not a joke when it undercuts law enforcement efforts to improve relationships with their communities.

“The officers that were behind him applauding and cheering about a comment that he made about police brutality should be ashamed of themselves,” Tobias said. “American modern law enforcement is not anymore about roughing people up and slamming people into cars. It’s about community-oriented policing and knowing your community and treating everyone with respect.”

Tobias continued to say that its the duty of police officers to maintain their professionalism at all times, even when dealing with vicious criminals.

“Police officers are granted two huge powers by the public and government. We have the ability to take away somebody’s freedom by arrest, and the ability to take away a life in a life or death situation,” said Tobias. “The public should expect and demand that we’re the most professional. When we’re handcuffing murder suspects and putting them into vehicles, that’s when we have to rise above and be the most professional that we can be.”

Since Trump’s speech, the Suffolk County Police Department has issued a statement emphasizing that they don’t condone belligerence against prisoners, and some other departments have made similar statements.