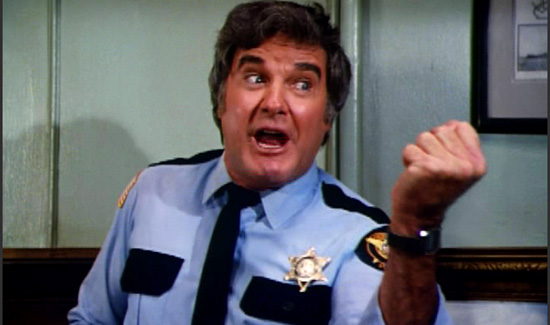 If you’re old enough to remember what life was like before cell phones and the internet, you may remember a show called “The Dukes of Hazzard.”

“Just’a good ol’ boys
Never meanin’ no harm.
Beats all you never saw
Been in trouble with the law
Since the day they was born.”

The show was not supposed to be realistic. The Dukes would frequently get themselves out of jams with dynamite and a bow and arrow.

Part of the fun of the show—in addition to waiting for scenes featuring their short-shorts-wearing cousin, Daisy—was the slapstick nature of the relationship between Boss Hogg and his sheriff, Rosco P. Coltrane.

Sadly, the actor who played the bumbling sheriff, James Best, has passed away.

No kid is ever going to watch “The Dukes of Hazzard,” point to Deputy Coltrane and say, “I wanna be a police officer when I grow up!”

But that wasn’t the point of the show or the character. He was supposed to be goofy and hapless. And nobody could portray those traits better than Best. He’ll be missed.