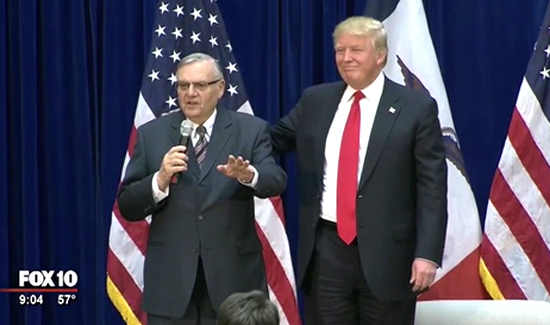 Former Arizona Sheriff Joe Arpaio, who was found guilty in late July of contempt of court after failing to stop racial profiling practices, said he would accept a pardon from President Donald Trump.

“Whatever the president wants me to do, I would support him,” Arpaio said to his state’s largest paper, The Arizona Republic, earlier this week. “If he needs help with anything, of course I’m going to help him.”

Arpaio, who served as Maricopa County’s sheriff for more than two decades, is a Trump supporter and spoke at the then-nominee’s events last year. Arpaio, however, is not sure whether the president is aware of his current legal situation.

“I’m not going to ask him,” Arpaio said of a possible presidential pardon, and he would not disclose whether the two spoke since Inauguration Day. “I’m very careful. I don’t go around bragging.”

The White House has not mentioned Arpaio’s case since Trump took office. The 85-year-old faces up to six months behind bars.