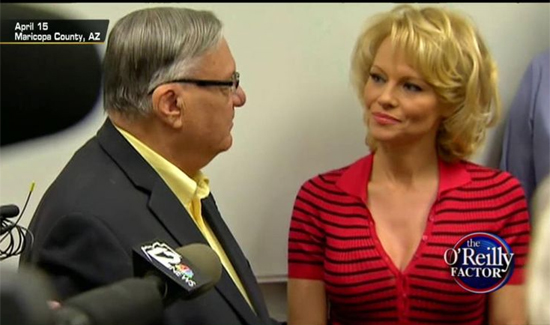 Say what you will about America’s self-described toughest sheriff, Joe Arpaio, but you can’t say the guy hasn’t had a hell of a run.

In Arizona, there are three things you can always count on—death, taxes, and the re-election of Arpaio as Maricopa County Sheriff.

But now, instead of getting publicity as the result of things like the sheriff’s Obama birth certificate investigation or announcing a new vegetarian menu at Tent City with Pamela Anderson, he’s in court, and it’s not going well.

The short story is that a judge ordered Arpaio to cease and desist his wildly controversial immigration crackdowns. The sheriff decided to disregard the court’s order, and now Joe’s facing contempt charges.

Joe’s supporters and contributors will be disturbed to learn that it’s not going very well.

Arpaio’s attorney abruptly quit, and some of the top brass has apparently jumped ship by turning on their boss in their testimony.

Is this the end for America’s “toughest sheriff?”

Only time will tell.