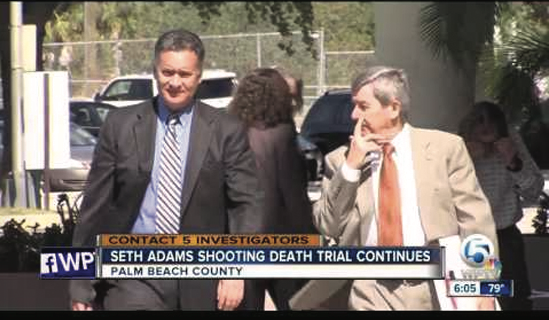 Via the Sun Sentinel:

“The investigation from beginning to end has been slip-shod and shoddy,” Hurley said Wednesday. “It’s a disgrace.”

The Sheriff’s Office and Sgt. Michael Custer face an excessive force and wrongful death lawsuit over Custer’s shooting of Adams in a Loxahatchee Groves nursery in 2012.

The deficiencies Hurley mentioned included investigators failing to measure the distance between Custer’s SUV and Adams’ truck and failing to determine whether it was beer or an iced tea mixture found in a mug left in Adams’ truck. Also, Custer’s boots weren’t taken into evidence that night and in a videotaped interview after the shooting, Custer wasn’t asked to show how he held the gun when he fired.

Those unknowns have become big issues in the civil trial nearly five years later. Jurors were not in the courtroom during Hurley’s criticism.

“There is one thing after another that was not done,” Hurley said. “It’s just amazing that they were not done.”

Before the trial recessed for the day Wednesday, Hurley warned jurors that the case is getting increased media attention and that they should continue to avoid television news, newspapers and Internet surfing that could expose them to reports about the trial.

Jurors examined the faded blue Ford Rander truck Seth Adams drove the night he was shot and killed by an undercover officer. Beside the driver seat of the truck was a glass mug that contained a tan-colored liquid.

Custer, 47, testified Wednesday, telling jurors that his late-night encounter with Adams was contentious from the start.

“The first words out of his mouth, he was screaming at me, ‘Who the f— are you? What the f— are you doing here?’” Custer said. “It was alarming to say the least.”

Custer, who was leading an undercover patrol, was parked in an unmarked SUV when Adams arrived about 11:40 p.m. at the nursery where Adams worked and lived.

Custer, who was wearing plain clothes, said he identified himself as an officer and tried to calm Adams. Custer said after both of them got out of their vehicles, Adams grabbed him by the neck.

Custer said he was able to break Adams’ grip and, after a struggle, he backed away, pointed his gun and repeatedly ordered Adams to get on the ground.

Custer said he kept his gun raised as he backed away, reached into his SUV for a radio and called for back up. Custer said Adams continued to refuse to get on the ground and then ran to his truck “after having [been] told not to do so.”

Custer said he kicked Adams’ open driver’s side door, but Adams got there before the door closed. Custer said Adams was rummaging around in the cab of the truck for something that Custer feared could be a weapon.

Custer said he used his right arm to try to pull Adams from the cab of the truck while keeping the gun aimed at Adams with his left. Custer said seconds later, Adams spun toward him and that’s when Custer fired four shots.

“I was thoroughly convinced he had grabbed a weapon,” Custer told jurors. “I was beyond scared. I was terrified.”