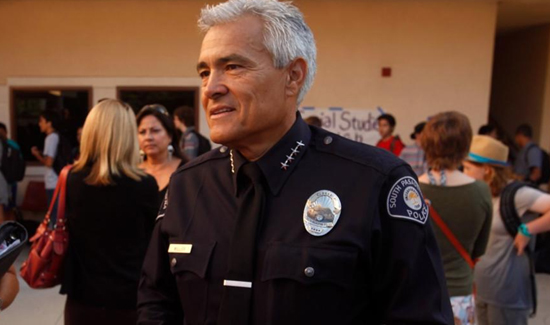 Via The Los Angeles Times:

A Los Angeles jury has awarded $4.8 million to a former South Pasadena police officer who alleged he was fired by the city because of a disability.

After a two-week trial, the jury on Thursday found unanimously in favor of Timothy Patrick Green, pictured above, an 18-year veteran who was dismissed from the Police Department in 2013.

Green’s lawsuit said the reason given for his dismissal, dishonesty, was untrue and that the real reason was discrimination based on his attention-deficit/hyper-active disorder.

South Pasadena City Atty. Teresa L. Highsmith did not return a call from The Times.

Former Police Chief Joseph Payne, who retired before Green’s dismissal, testified on his behalf, saying he was “a good officer, a good man, perhaps the best cop in the department at community policing,” said Green’s attorney, Vincent Miller.

According to Miller, Payne testified that the city failed Green by not providing accommodations to help overcome his difficulty writing reports. Instead, the lawsuit alleged, Payne’s replacement, Chief Arthur Miller, endorsed the recommendation of a captain who had long been trying to have Green fired.
South Pasadena man charged with murdering his 5-year-old son was about to flee, officials say

Green’s termination revolved around a 2012 pre-dawn incident when he failed to cite a motorist he had stopped for speeding.

Green said he let the motorist go when he saw what he thought were silhouettes at the middle school across the street and went to investigate.

The next day, the driver went to the police station to report that he may have fled a police officer. Later investigation established that he had been involved in a hit-and-run accident before he was stopped by Green.

According to the lawyer, Chief Miller claimed Green was lying about being more concerned about suspicious silhouettes at the school than the driver he pulled over.

“The jury clearly felt it was obvious disability discrimination,” the lawyer said.

The award, he said, was to compensate Green for lost wages and “the fact that they destroyed his career permanently.”

“They fired him on charges of dishonesty,” the attorney said. “It’s known as the death penalty in law enforcement.”