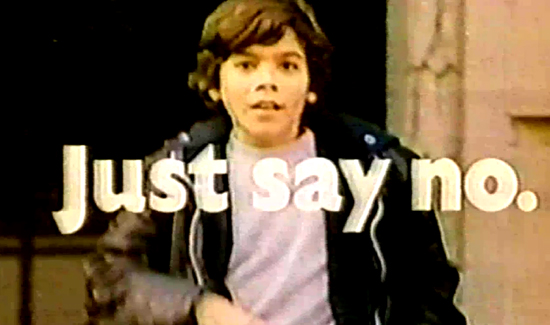 Ed. note: The Trump administration and Attorney General Jeff Sessions have been talking a good game on “supporting law enforcement” thus far, but a lot of the support appears to be moral and rhetorical in nature, as opposed to action. That being said, you really have to wonder about the wisdom of a system where people who are so old wield so much influence and younger people have little influence. At any rate, anyone who thinks the three words “just say no” amount to anything more than 30-year-old political slogan-eering is likely mistaken.

“I think we have too much of a tolerance for drug use ─ psychologically, politically, morally,” Sessions told law enforcement officials in Richmond, Virginia. “We need to say, as Nancy Reagan said, ‘Just say no.'”

Sessions invoked a phrase that was once central to President Ronald Reagan’s 1980s war on drugs.

“Just Say No” was the marketing mantra behind a public-education campaign that complemented an offensive marked by aggressive policing and mandatory-minimum prison sentences. The zero-tolerance approach, a response to fears about crack cocaine, helped drive down crime rates but also fueled a dramatic increase in the American prison population.

Thirty-five years later, the iconic slogan, and the advertising campaigns it inspired (“This is your brain on drugs”), are now considered by many to be outdated and ineffective. The same thing goes for many of the resulting drug-education programs, which were based on the “Just Say No” model of lecturing resistance to peer pressure. Perhaps the best known of them is DARE, in which police officers warn kids about the dangers of drugs.

Sessions didn’t mention any programs by name in his speech to law enforcement officials on Wednesday, but he recalled the effort fondly:

“Educating people and telling them the terrible truth about drugs and addiction will result in better choices by more people.”

“Ed. note: The Trump administration and Attorney General Jeff Sessions have been talking a good game on “supporting law enforcement” thus far, but a lot of the support appears to be moral and rhetorical in nature, as opposed to action.”. Excuse me? Trump has barely walked in the door of the White House. They held up Sessions nomination. Geez. Give them some time and a chance! I am very disappointed with your Ed note. Trump is a man of law and order while his opponents do everything in their power to stop him. He is supportive of Law enforcement! He is being prevented by Federal judges appointed by Obama from doing his job. He wants to close our borders, properly vet and keep out terrorist! We support LEO. Please support our president – TRUMP

Couldn’t agree more! I’m increasingly concerned about the anti-Trump bent of some of your articles, with snide, snarky remarks peppered throughout. Trump’s been in office less than two months, and has YEARS of Obama’s communist theology to reverse and ferret out from a “justice” department infested with entrenched liberal bureaucrats. Your offices might be in Cambridge, but the majority of your readers have opinions slightly different than that Mecca of fair-minded liberalism. A few weeks of Donald Trump have been immensely better that 8 years of B.H.O. God bless Trump! James Carnell/ member- Boston Police Patrolmen’s Association

Guess Obama was your guy Ed…..Sad that you are taking the “low road” and not giving our President a chance…Rome was not built in a day, any more “anti-Trump articles and I will be leaving….I’m sure that bothers you…not….