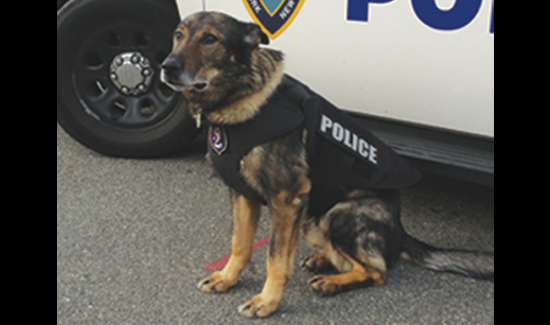 Sarah’s desire to protect police K-9s began 13 years ago, when she read about a police dog killed in the line of duty in the children’s, storyteller book series, Chicken Soup for the Soul. The story she read put her on the path that culminated in the vest donation. But there were detours along the way.

On a June morning, 1998, in Bradley Beach, New Jersey, Donald Bunting, a former Black Liberation Army member and wanted for an armed, home invasion robbery a few days prior in Asbury Park, NJ, was barricaded in his Newark Avenue apartment. Bunting kept local and state police along with the Monmouth County Sheriff’s Office at bay for 22 hours. Officials used everything in their less-than-lethal compliance inventory; negotiations, including pleas from his niece, tear gas, a stun grenade and even a high-pressure hose, to end the standoff. Bunting was not giving up.

About 8:45 a.m., Monmouth County Sheriff Officer Robin Eckel, a K-9 handler, was instructed to send his partner, K-9 Solo, a four-year old, male German Shepard with two years on the job, into the apartment to flush out Bunting. It was reported Bunting still had ties to Joanne Chesimard, the fugitive murderer of New Jersey State Police Trooper Werner Foerster who Chesimard shot and killed in 1973. Officer Eckel led Solo to the apartment’s front door that Friday morning. Just before releasing Solo, as Solo turned to his partner and licked Eckel’s face. Bunting shot and killed Solo.

Five years later, Sarah, then 10 years old, read a story published in “Chicken Soup for the Soul” about the line of duty death of a police K-9 in New Jersey, K-9 Solo. The story was written by an 11-year-old girl from San Diego County, CA, who was not only shocked by Solo’s death, she had recently lost her own dog, but concerned Solo did not have any protective body armor to wear.

She saved birthday gift money, money from chores, allowances, and holiday gifts. Sarah was accumulating the funds needed to complete her mission. Then a family medical emergency arose. Sarah made the decision to put the money towards helping her family.

She saved toward the family’s medical expenses. And then, of course, life got in the way but Sarah never let go of her original goal to protect a police K-9. Through elementary school, high school and college Sarah continued to put money away so one day she could purchase a K-9 vest.

Sarah reached her objective two years ago, and purchased a Level 2, K-9 protective body armor vest manufactured by the International Armor Corporation. Though deep in her master’s studies, Sarah still had to find a law enforcement agency that could use the vest. Sarah spoke with her aunt, who worked for the Chester, NJ. Police Department, who introduced Sarah to Port Authority Police K-9 handler, and Port Authority Police Benevolent Association trustee, Police Officer Brett Porigow.

Sarah learned from Brett that Port Authority Police Department (PAPD) K-9s are not provided with body armor. This was alarming especially since many of the PAPD K-9s are explosives and weapons detection K-9s and Port Authority facilities are the nation’s top terror targets. Sarah now found a recipient for her vest and the fulfillment of her goal.

Sarah was a special guest of the Port Authority Police Benevolent Association (PAPBA) at its November 22, 2016, Executive Board meeting. Sarah was presented with a plaque of appreciation by the PAPBA and her donation and efforts were read into the PAPBA’s official record. Sarah’s vest will now be worn by Police Officer Porigow’s partner, K-9 Nero and other PAPD K-9s.

Sarah’s concern for police K-9s and law enforcement is a testament to who Sarah is, a woman with selfless commitment to those who put their lives on the line every day so all can live in peace and safety. Sarah will soon receive her Occupational Therapy Master’s Degree putting her on a new path helping people put their lives back together. The Port Authority Police Benevolent Association is grateful for Sarah’s life of service to others. Thank you, Sarah.

Bobby Egbert is the public information officer for the Port Authority Police Benevolent Association. He can be reached at regbert@papba.org.