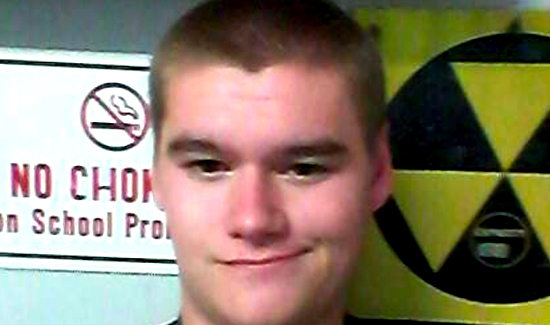 A 19-year-old former Transylvania University student has been arrested after a machete attack on the central Kentucky campus left a woman injured, police said.

Lexington, Kentucky, police said Mitchell W. Adkins, of Cincinnati, walked into Jazzman’s Cafe on campus armed with a machete and a bag full of knives shortly before 9 a.m. Friday. Police said he pulled out the machete and attacked a female student, who was sent to University of Kentucky Chandler Hospital with injuries not considered life-threatening, a local NBC affiliate reported. Another female was reportedly treated by paramedics on scene.

Tristan Reynolds, who witnessed the attack, told the Lexington Herald-Leader that about 30 to 40 people were in the cafe at the time.

“A guy came in, banged something, a hatchet or an ax, on the table and said ‘the day of reckoning has come,'” Mr. Reynolds said. “He asked somebody what their political affiliation was, they said ‘Republican’ and the guy said ‘you are safe.’ And then I realized what was going on and started getting people out.”

“We started to scatter and then very, very quickly, campus security was getting everybody sheltered and secure,” he said. “They were very on it.”

Another witness, Michael Soder, told NBC: “He asked the first girl if she was a Democrat or a Republican. She said Republican. He said OK, then asked some other girl. … By that time, some of my friends were running out and yelling for us to leave.”

The university was placed on a cautionary lockdown following the attack and classes were canceled for the rest of the day.

Mr. Adkins has been charged with first-degree assault, fourth-degree assault and three counts of wanton endangerment, the Herald-Leader reported. Mr. Adkins was taken to a hospital to be evaluated for “self-inflicted injuries,” police said.

“They’ve always been amazing, and today they proved their worth again,” Mr. Carey said. “They were there immediately. They saved what could have been a much more disastrous situation, and I’d also like to commend the Lexington police for responding immediately as well.”