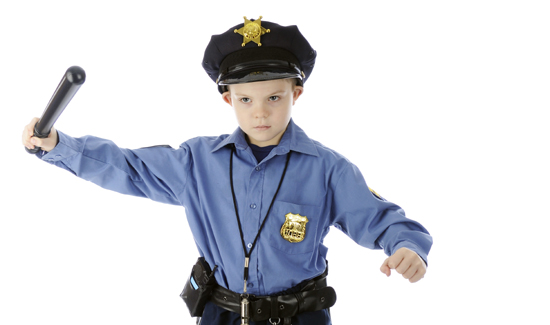 Here’s the thing about a lot of police impersonators- they’re just not very believable.

They’re usually not 14 wither but a kid in Victorville, California was recently arrested for a series of police impersonator incidents.

The kid had his routine down but good.

“He looked so normal, like a real police officer when I’d seen him,” said Jasmine, who didn’t want to reveal her last name.

“He was like, ‘Is there a domestic disturbance here?'” said Jasmine. “And I was like, ‘There’s nothing going on here.'”

Like most fake cops, the kid made traffic stops and took IDs from people but it’s unclear if he shook anyone down or stole anything.

The kid drove and SUV, local cops had a description and pulled over a vehicle that matched being driven by a 77-year-old woman. Her 14-year-old great grandson, who was in the car when she was stopped, turned out to be the fake cop.