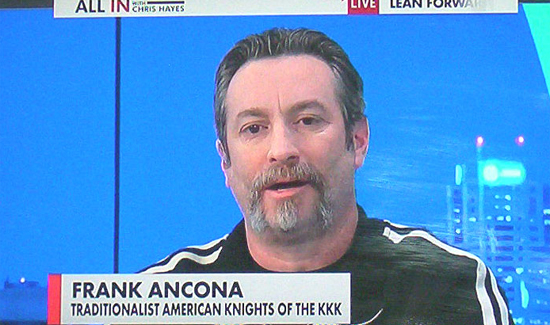 A Missouri Ku Klux Klan leader might have been shot in his sleep because he had told his wife he wanted a divorce, St. Francois County Prosecutor Jarrod Mahurin said Monday after filing murder charges.

“It may have been a marital issue,” he told a reporter. He said Frank Ancona, 51, was shot in the head between 2 and 3 a.m. on Thursday.

Malissa Ann Ancona, 44, of Leadwood, Mo., and her son, Paul Edward Jinkerson Jr., 24, of Belgrade, Mo., were charged with first-degree murder, armed criminal action, tampering with physical evidence and abandonment of a corpse.

Jinkerson shot his sleeping stepfather in the bedroom of the victim’s home in Leadwood, sheriff’s Detective Matt Wampler wrote in an affidavit accompanying the charges. Ancona’s body was taken in Jinkerson’s vehicle to an area outside Belgrade, where it was dumped near the Big River, Wampler wrote.

Ancona called himself an imperial wizard with the Traditionalist American Knights of the Ku Klux Klan.

A website for that group features an image of Ancona in a white hood and robe standing in front of a burning cross. His wife is shown next to him in another photo.

The Park Hills Daily Journal said Ancona was reported missing Friday, when his employer called Leadwood police to say that he failed to show up work Wednesday or Thursday. A neighbor said Ancona had a job delivering parts for a St. Louis auto supply company.

Malissa Ancona told investigators that he had been sent on a trip deliver a part, but the employer denied that, the newspaper said. She told authorities she had last seen her husband Wednesday.

When investigators searched the Ancona home Saturday, they found “extensive blood evidence” in the master bedroom, officials said. Malissa Ancona told police in a recorded interview that Jinkerson shot her husband, and she helped clean up the blood and tried to cover up the crime, Wampler wrote.

Mahurin said that both Ancona and Jinkerson were involved in disposal of the body and the cleanup.

Police also found a safe that had been broken open. Frank Ancona’s guns were missing. Malissa Ancona told police her husband took them and was planning to file for divorce when he returned from his work trip.