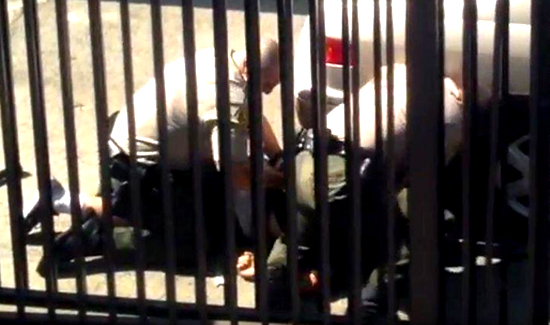 Expensive payouts stemming from shootings by Los Angeles County sheriff’s deputies continue to climb, with the Board of Supervisors on Tuesday approving nearly $5 million for the families of two men shot by deputies in separate incidents.

Jose Hernandez, the victim of a knife attack, was mistakenly shot in the leg as lawmen fired 34 shots at another man wielding a blade. In the other case, Noel Aguilar was shot and killed just after a deputy inadvertently shot his fellow officer in the stomach as they struggled to hold Aguilar face-down on the ground.

The payments — $2 million to Hernandez and his son and $2.97 million to Aguilar’s family — come at a time of soaring deputy-related litigation costs at taxpayers’ expense. Last fiscal year, payouts to resolve legal claims tied to law enforcement actions cost the county nearly $51 million, a 65% jump from the previous year.

The expenditures have climbed steadily over the last few years. In the fiscal year that ended in 2012, law enforcement-related payouts were $5.6 million.

Aguilar was riding his bicycle in Long Beach on May 26, 2014, when he glanced at uniformed deputies and quickly pedaled away. Deputies Albert Murad and Jose Ruiz, who later told investigators they believed Aguilar was carrying a gun, chased the 23-year-old and wrestled him to the ground, handcuffing one of his wrists, according to a memorandum filed by the Los Angeles County district attorney’s office.

Early on in the struggle, Murad retrieved a loaded firearm from Aguilar, the memo said. But moments later, according to the memo, Ruiz believed Aguilar was reaching for a gun, and he fired at the young man’s belly. Ruiz hit his fellow deputy instead. As the lawmen continued to restrain Aguilar, the young man reached for Ruiz’s gun and was fatally shot by both deputies, the memo said.

In a cellphone video captured by a bystander, the deputies are seen struggling with a man on the ground for half a minute after one of the officers is shot. Then a deputy appears to fire at the man, followed by the other officer, who pumps three rounds into the man’s back.

Murad, the injured deputy, is now back at work, sheriff’s officials said.

In a federal lawsuit, Aguilar’s family argued that he never threatened the deputies with a gun.

“A lot of times people look to dehumanize a person who is killed by police,” said Humberto Guizar, an attorney for Aguilar’s family. “The settlement to the family it makes things a little bit better, but it doesn’t change the fact that they lost a loved one. No amount of money can change that.”

The other payout stems from an incident on Oct. 4, 2014, when deputies responded to a call about an assault with a deadly weapon. Hernandez’s face was sliced by his neighbor, Johnny Martinez, at his residence in Vermont Knolls, according to a memo filed by prosecutors.

Martinez, 28, suffered from schizophrenia, prosecutors said. As deputies tried to coax Martinez to put his hands behind his back, Martinez swung a long knife at deputies, spurring them to discharge a Taser and pepper spray. After Martinez pulled the Taser prongs from his chest and charged again, deputies fired 34 rounds, killing him, the memo said.

Hernandez was struck in the leg by “an errant bullet or bullet fragment,” according to the report. Hernandez filed a lawsuit, saying his injuries were life-threatening. An attorney for Hernandez did not respond to requests for comment.

A sheriff’s spokeswoman would not comment directly on the shooting of Hernandez or whether deputies involved in either of the incidents were disciplined.

“The Sheriff’s Department has made great strides and improved training to assist with the de-escalation of critical situations that deputies face on a daily basis,” spokeswoman Nicole Nishida said in a statement. “This was not a direct consequence of this tragic incident, but in an overall commitment by the LASD to recognize that 70% of our use of force involves individuals suffering from some form of mental illness or substance addiction.”

The Sheriff’s Department inspector general, Max Huntsman, said individual settlements rarely spur meaningful changes in how deputies are trained or respond to calls, but the cumulative effect of the settlements attract the attention of county supervisors and can fuel reform efforts.

“The payouts keep the pressure up,” he said.