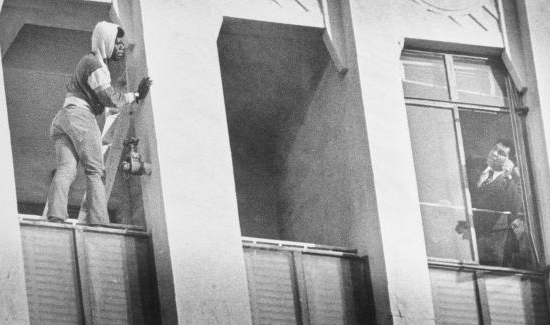 In January of 1981, Muhammad Ali’s heroics made all of the difference in saving a man’s life. Bruce Hagerty, then a police sergeant in the LAPD, was in command 35 years ago at the time crisis struck. He remembers Ali being there to help. Without him, things might have turned out differently. “He was kind of the last resort,” Hagerty says. “I didn’t have any more tools in my toolbox. And he was kind of a gift.”

The CBS segment is amazing to watch. It shows Ali, dressed in a suit and tie, dangling out of a ninth-story window, talking to a man who was perched on a ledge and threatening to jump.

“Former heavyweight champions slip out of the news as easily as ex-presidents, but Muhammad Ali was never your garden-variety champion of all the world,” said Walter Cronkite on the Jan. 20, 1981, edition of the CBS Evening News. “Yesterday in Los Angeles, he responded like a superhero when a distraught man threatened suicide.”

A United Press International story published on Jan. 20, 1981, has more details on how Ali came to the scene.

Police negotiators tried for hours to persuade the man to come inside the building. Ali, who was told of the suicide threat by his public relations manager, talked to the depressed man for about 20 minutes.

Howard Bingham. All’s public relations manager, said he first saw the man on the ledge and when he asked police if Ali could help, they told him no.

“I went back to my car and called Ali anyway,” Bingham said. “I told Ali there was a guy up here on a building about a mile from his house and maybe he could get through.

“About four minutes later, Ali comes driving up the wrong side of the street in his Rolls-Royce with his lights blinking,” Bingham said.

An Associated Press piece claims that people on the ground urged the distraught 21-year-old man to jump. But Muhammad Ali, the former heavyweight boxing champion, promised to help him find a job and talked the man down from a ninth-floor fire escape.” When the man saw Ali, he reportedly shouted, “It’s really you!”

Policemen, a psychologist and a police chaplain tried unsuccessfully to talk to him, said Sgt. Bruce Hagerty, who described the man as “a very distraught, mixed-up young man.”

The man, who was too young to have served in Vietnam, “was talking Army jargon … He said the Viet Cong were out there,” Hagerty said.

Ali told the man: “You’re my brother. I love you and I wouldn’t lie to you. You got to listen. I want you to come home with me, meet some friends of mine.”

After half an hour, Ali put his arm around the shoulders of the man and led him back to safety, witnesses said.

The two emerged from the building, ignoring cheering onlookers and drove away in Ali’s Rolls-Royce limousine to a police station.

Ali accompanied the man to a Veterans Administration Hospital, where police said the man would undergo a 72-hour mental examination.

Los Angeles police gave Ali all the credit for talking the man down. “No doubt about it, Ali saved that man’s life,” a police spokesman told the AP.

The AP story quotes Ali as saying that the man, who was never identified, “was just depressed. He couldn’t find work. His father and mother don’t like him. He don’t get along with his family. He wants to be somebody.”

The CBS footage shows a bunch of onlookers chanting as Ali and the man he rescued walk away from the scene. They’re chanting, “USA! Digs Ali! USA! Digs Ali!”

CLICK HERE and then click the red arrow button below the headline at the top of the page to listen to Sgt. Hagerty talk about the incident on NPR’s”It’s Only a Game” podcast.

One story few had heard before, however, caught our attention. More than just a champion in the ring, Ali became a hero of the people, time and time again, for many reasons throughout his life. But in January of 1981, Ali’s heroics made all of the difference in saving a man’s life.

Bruce Hagerty, then a police sergeant in the LAPD, was in command 35 years ago at the time crisis struck. He remembers Ali being there to help. Without him, things might have turned out differently.

“He was kind of the last resort,” Hagerty says. “I didn’t have any more tools in my toolbox. And he was kind of a gift.”