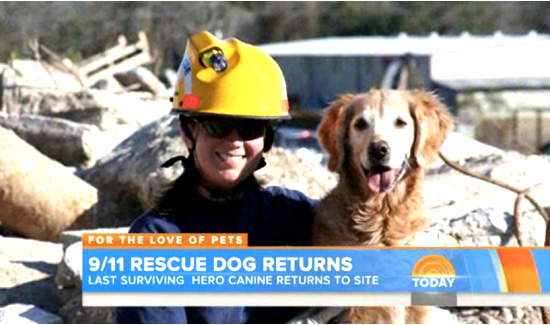 The last known living 9/11 search dog has died in a Houston suburb at age 16.

Bretagne (BRIHT’-nee), a golden retriever, was euthanized Monday at a veterinary clinic in the Houston suburb of Cypress, according to a statement from the Texas A&M Engineering Extension Service.

Bretagne was 2 years old when she and her handler, Denise Corliss, were part of the Texas Task Force 1 sent to the World Trade Center site in Lower Manhattan after the terrorist attack brought down the buildings on Sept. 11, 2001. They spent 10 days at the scene searching rubble for human remains.

About two-dozen first responders lined the sidewalk leading to the veterinarian’s office and saluted Bretagne as she walked by for the final time Monday, The Houston Chronicle reported. An American flag was draped over her body as she was carried out of the facility.

Bretagne retired from active duty at age 9. At 15, she was taken by Corliss to the 9/11 memorial and participated in an interview with Tom Brokaw of NBC News. Corliss told NBC’s “Today” that in recent weeks Bretagne began experiencing kidney failure and slowing down.

Bretagne was nominated for a Hero Dog Award from the American Humane Association in 2014. An online biography posted by the organization says that Bretagne served as an ambassador for search and rescue dogs in retirement, often visiting elementary schools.