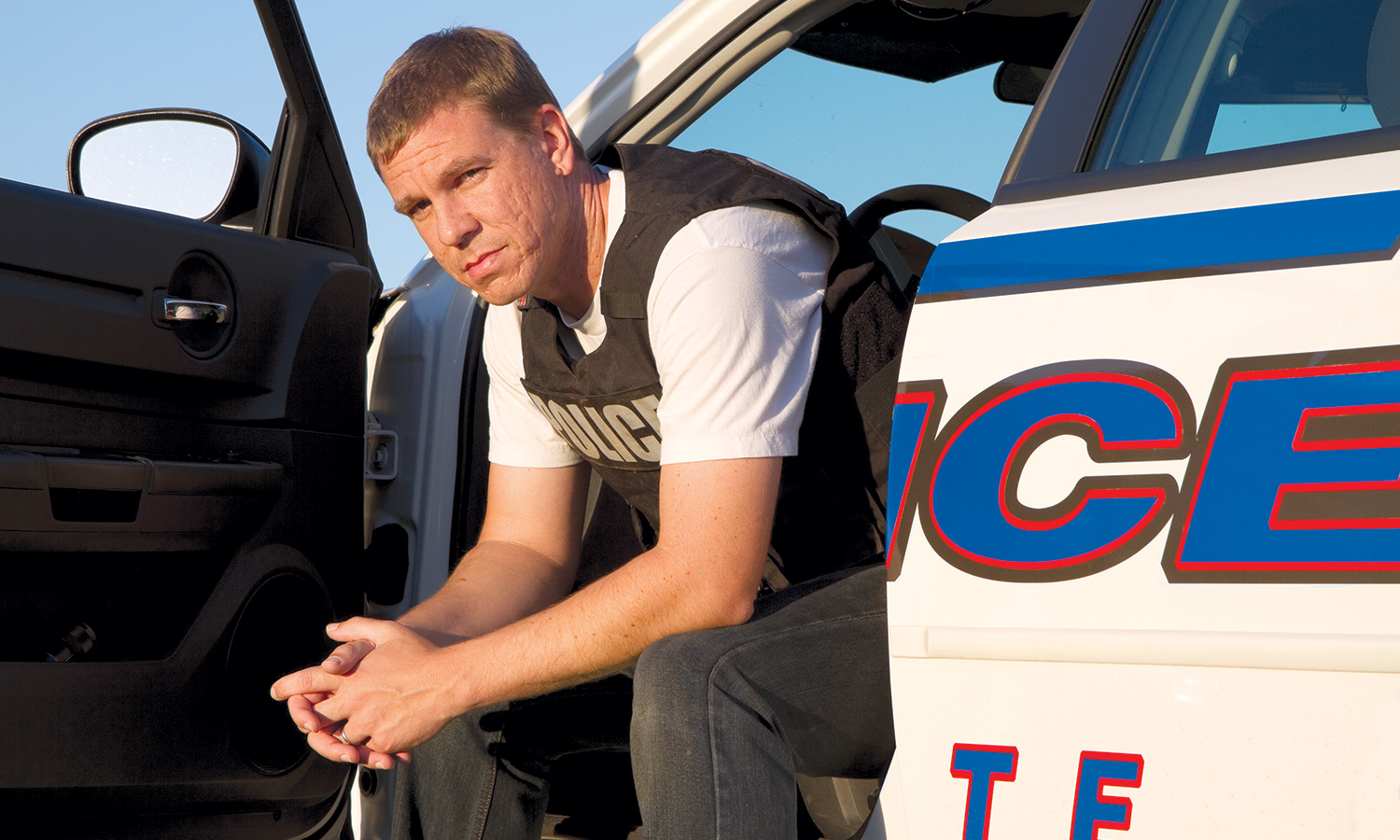 In the wake of George Floyd’s death, America has faced an unprecedented period of tension between law enforcement and civilians. It has led to a disturbing trend of officers being harassed, bullied, threatened and having their property damaged or destroyed.

“About an hour ago, a black SUV stopped in front of my home and laid on the horn for a while,” he tweeted. “Message clear, I know where you live. Here’s a message for you. I’m a kid from Dewey/Stone area. Born tough, raised tough. Blue collar. I won’t go easy if you come for me.”

Unfortunately, Phelan is not alone. According to KHQ-TV, vandals in Bozeman, Montana, spray-painted “pig” and “1312” — a numerical rendering of “A.C.A.B.,” an acronym that stands for “all cops are bastards” — on a law enforcement family’s garage.

In nearby Gallatin County, a profane anti-police note was left at the home of family members of late Gallatin County Sheriff’s Deputy Jake Allmendinger. Allmendinger was killed in the line of duty last year after being pinned under his car while trying to help a stranded motorist.

“Imagine being such a piece of s— you were proud to be a cop right now,” the note read. “Go f— yourself and take down this ‘blue pride’ flag. Black Lives Matter. Your neighbors.”

The “blue pride” flag referenced in the note was a thin blue line flag, a banner to show support for law enforcement, that the family hung outside their home. It is unknown if the perpetrator who left the note was specifically targeting Allmendinger’s family or if they targeted the house simply because of the flag.

Families across the country have started to remove or hide pro–law enforcement symbols from their homes and vehicles in fear of becoming the target of similar actions.

“I needed to take the blue line stickers off my wife’s and daughter’s cars. I know of three blue line flags taken or defaced and eggs thrown at one home,” former NYPD Detective Rob O’Donnell told the Washington Examiner. “A friend’s daughter, who from age 13 made blue line bears for fallen officers’ families out of their uniform shirt, was getting death threats, and they needed to remove the wrap from her car.”

It doesn’t stop there. Paul Chabot is a retired deputy sheriff reserve in San Bernardino County, California, and runs a website that helps officers relocate to police-friendly municipalities. He told the Washington Examiner that he has spoken to officers and their wives who have told him their children also have been targeted.

“I talked to a wife today from Seattle, whose husband’s at Seattle P.D., and she knows that they need to get out of there,” he said. “She’s afraid for her husband’s life and her kids in the neighborhood. She said that they’re getting picked on, they’re getting called names. It’s not the same like it was even just two weeks ago, three weeks ago, just because they’re a law enforcement family now. Their kids are being targeted by people in the neighborhood.”

Even animals associated with law enforcement have been targeted. WGN9 reported that someone in Chicago attacked a police officer’s dog after seeing that it had a collar indicating it belonged to a law enforcement officer.

The report said the suspect said “F— the police, I’ll kill all of them” as he picked up the dog by the leash, with the choke collar digging into the animal’s throat. The perpetrator didn’t stop until being scared off by a nearby shopkeeper.

Such horrendous treatment has led to low morale in departments across the country. That’s not helped by the fact that many departments have experienced wide-ranging budget cuts, reductions in overtime pay and increased scrutiny. It has left many officers feeling abandoned.

“Look at how people are harassed online now for supporting the police,” Chabot said. “You don’t see people supporting police. It’s no longer the cool thing to do. In fact, it’s quite the opposite. So, it just seems like things are so backward. And we cannot wrap our minds around what is happening in societies that we love and that we swore to protect. It feels like we’ve always had their back and now, all of a sudden, nobody has ours.”

These incidents paint a disturbing picture of the treatment of law enforcement in America right now. No matter what your personal politics or beliefs, it is important to remember to always treat other people with kindness and respect. Behavior like this will do nothing to heal the rift that has formed, it will only serve to drive people further apart.