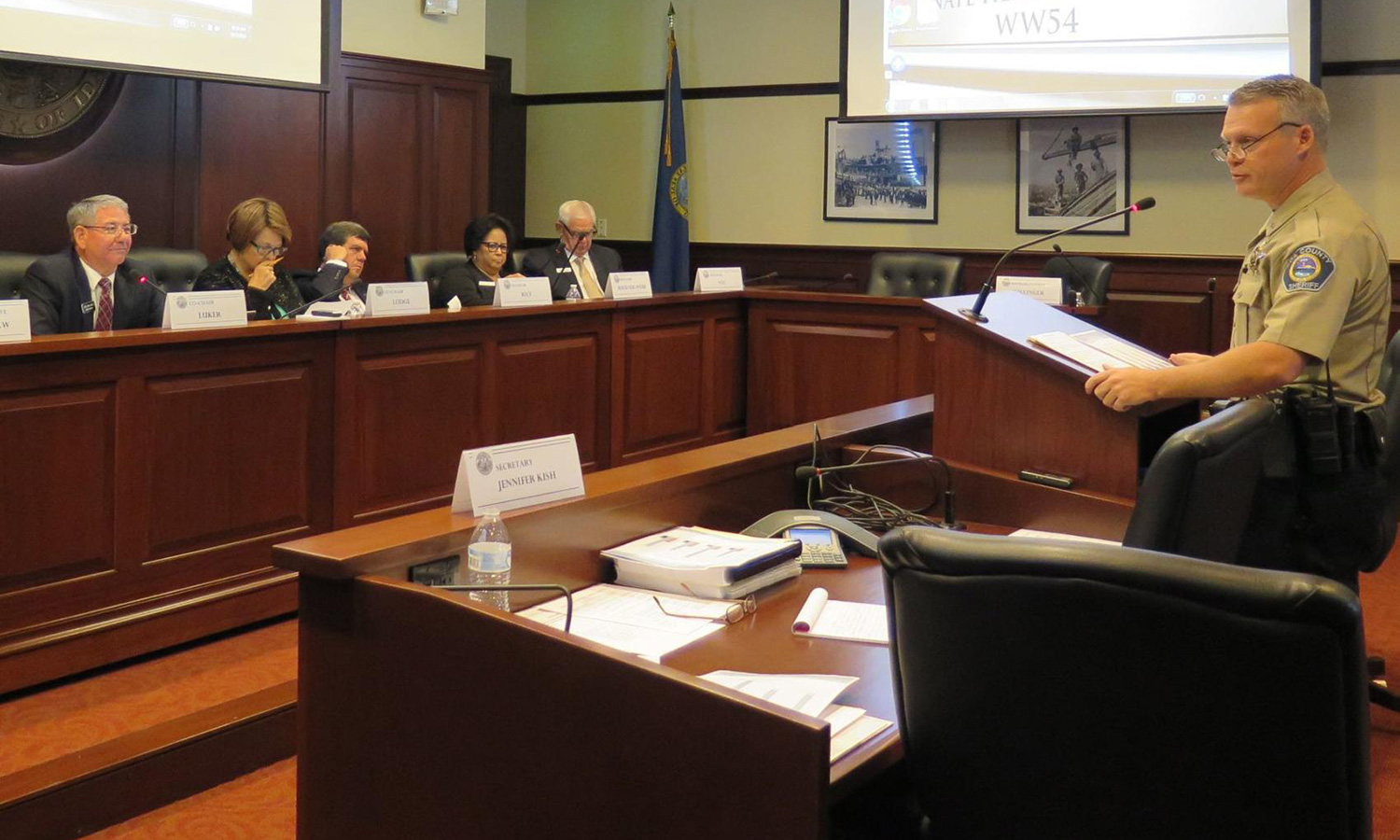 Ada County Sheriff Stephen Bartlett told state lawmakers Monday that his county jail is being overrun with state prisoners including parole violators, and he blames the state’s justice reinvestment initiative.

But state officials said JRI, which the state adopted in 2014, actually didn’t change anything on when state inmates are released or when parolees land in jails.

“Nowhere in statute does it say that,” she said. “That was never a mandate of justice reinvestment.”

“The Parole Commission has always had complete discretion to make parole decisions,” Jones told the lawmakers. “That was true before JRI, it’s true today.”

Bartlett said he believes “one of the unintended consequences of JRI is that prisoners who should be in custody have been released on parole, where they’ve committed crimes at a higher rate than ever. Just look at the drastic increase in parolee bookings at the Ada County Jail since 2014.”

But nothing in Idaho’s justice reinvestment initiative calls for early release of prisoners. “That’s an important point, that JRI doesn’t mandate release of anybody,” said Rep. Lynn Luker, R-Boise, the House Judiciary Committee chairman and co-chair of the joint Criminal Justice Reinvestment Oversight Committee. “It’s still up to the parole board.”

Just as before JRI, the Parole Commission doesn’t consider releasing any Idaho inmate until the inmate has served his or her full fixed term as set by a judge, Jones said. After that, the commission weighs risk to the community in deciding whether to release an inmate on parole during their indeterminate time that follows their fixed term.

JRI gave the commission some tools to use evidence-based practices in its decisions and increased the amount of data available, Jones said, and that’s “been really good.” But, she said, “It hasn’t really changed the practice of parole.”

The assumption in adding those tools was that “people were not getting out in a timely manner,” she said. “I think that was true, but it wasn’t because of parole decisions. It was because we had a backed-up treatment system.”

With improvements in treatment programs inside prisons, inmates who were awaiting programming completed it, and the long waiting lists they faced back in 2015 were eliminated, Jones said. That did lead to more offenders being released on parole, but they still were being released under the same standards as before.

Bartlett’s was just the latest in a continuing chorus of criticism from law enforcement and prosecutors of the state’s justice reinvestment initiative, which is aimed at reserving prison cell space for the most dangerous criminals, while investing the savings from less incarceration into programs designed to reduce repeat offenses among lesser offenders. Ninety-eight percent of Idaho’s prison inmates eventually are released back into the community.

A key aspect of the justice reinvestment initiative, calling for shorter, 90- or 180-day sanctions for parole violators, was repealed in 2017 at the urging of law enforcement officers who said criminals were being let go too early. The state then expanded the Parole Commission so it could hear more cases; it has full discretion over who gets released and who gets sent back behind bars.

A week ago, two Boise police officers authored a guest opinion in the Idaho Statesman headed, “Justice Reinvestment Initiative has made our communities more dangerous.” The two wrote, “JRI is an ill-conceived and poorly administered program that created state policies leading to the early release of prisoners.”

Idaho, in cooperation with the Council of State Governments, first passed its justice reinvestment legislation in 2014. All three branches of state government — the Legislature, the executive branch and the courts — collaborated on the plan, which is aimed at halting what CSG identified as a “revolving door of recidivism” in Idaho’s criminal justice system.

Idaho has the highest incarceration rate of any of its surrounding states and the lowest crime rate.

“I know that everyone’s trying to find answers,” Sen. Patti Anne Lodge, R-Huston, said with a sigh after Monday’s meeting. Lodge, chairwoman of the Senate Judiciary Committee, co-chairs the oversight committee with Luker.

“I think we’re on the right track,” she said. “We just have to have the money to do it.”

Sen. Jim Rice, R-Caldwell, had a strong reaction to Bartlett’s comments. Rice said Idaho passed JRI but hasn’t really implemented it — because it hasn’t sufficiently increased the number of probation and parole officers to supervise offenders who are out on parole or probation, or the amount of treatment available to released offenders in the community.