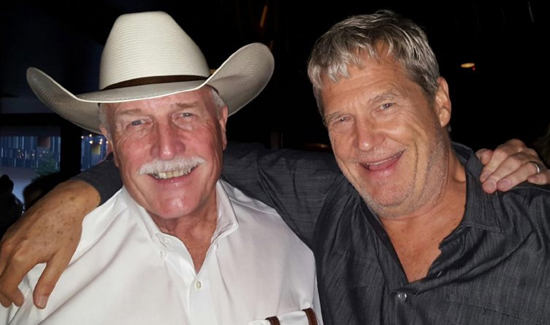 Via the Daily Beast:

“When someone sees a Texas lawman, the first thing you notice is the hat,” Sheriff Parnell McNamara told Jeff Bridges over the phone.

McNamara, a Waco native, owns more than 50 cowboy hats—some Stetsons, some bespoke, some worn, some new.

“You don’t want to look like Howdy Doody or Billy Crystal in City Slickers,” he informed Bridges. “A hat is very important.”

The two were having one of many phone calls in preparation for Bridges’s Oscar-nominated role in Hell or High Water as a Texas Ranger named Marcus Hamilton. The character was inspired by McNamara, whose cousin Taylor Sheridan wrote the Oscar-nominated screenplay. (The film was also nominated for Best Picture.)

McNamara, 70, was a U.S. marshal for more than 30 years and now serves as the sheriff of McLennan County. He looks exactly how you’d imagine: leather gun holster for his .45-caliber pistol, creased jeans, boots, a perfectly trimmed mustache, and of course, a cowboy hat.

At the sheriff’s advice, Bridges carried a .45-caliber automatic, grew a mustache, and drove a Dodge pickup truck for the movie. It’s exactly the same model as McNamara’s, only it’s silver instead of black. And the sheriff’s unwieldy rack of long guns is missing in the film.

“The cool thing about him is that he wanted to learn everything he could about that lawman character,” McNamara told me last week. “He wanted to get everything right, from the hat to the guns to the shirt to the boots.”

The two read lines from pivotal moments in the film, and McNamara provided notes on how to carry a gun once you’re retired.

“Undo your shirt and stick it inside,” McNamara recalls telling Bridges, explaining how carrying a firearm in a boot would make it hard to reach in an emergency. “If you have to get it out quick—watch the end of the movie, you can tell where his gun is.”

“He was so helpful,” Bridges told a local TV reporter, of McNamara. “He was the first guy I called up, and ya know, showed him pictures of my uniform and said, ya know, ‘is it lookin’ right?’”