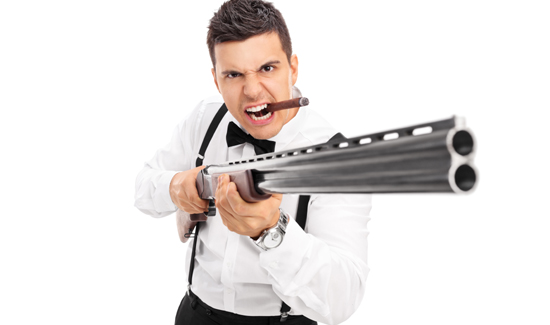 Guns are dangerous. They’re less dangerous n the hands of people with training that know how to use them but they’re still deadly weapons.

And accidents happen. There was that old lady in Florida that was hot and killed recently during a citizen’s police academy because some careless individual loaded a weapon with live rounds.

And not a day goes by where there isn’t a “Two-year-old picks up fathers gun, shoots and kills five-year-old sister.”

If you read American Police Beat you know that police are not immune. There was an incident recently where a police officer was cleared of any wrongdoing after dry-firing his weapon at another officer’s head in Washington D.C.

The point is that it’s monumentally stupid to screw around when firearms are in play.

Anyway, a city worker is in a little trouble after bringing a shotgun to work, waving it around at co-workers he perceived to be liberal and asking them “if they were scared.” At any rate Denis Kearbey, streets superintendent for Poplar Bluff has been banned from government buildings.

He took over the superintendent’s job last year after his previous boss was arrested and charged with shooting a woman during a custody dispute.

There basically to ways people will come down on stuff like this: A. That man is dangerously stupid. (and) B. Some people just can’t take a joke.