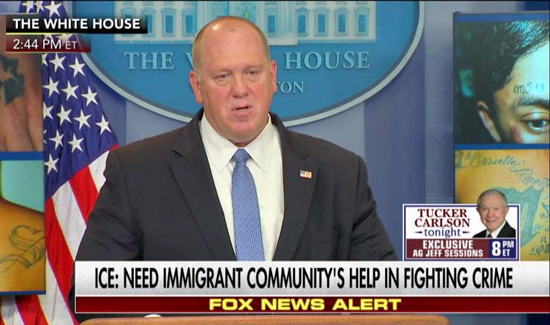 “We’ve got to start charging some of these politicians with crimes,” The acting director of U.S. Immigration and Customs Enforcement Thomas Homan recently told FOX News.

Homan also told FOX that he thinks politicians should be held “personally accountable” for crimes committed by people living in the U.S. without the proper documents. That prospect however sounds more like a Lou Dobbs fever dream than a rational plan to move the needle on 287G participation.

Homan may have been on damage control detail in his recent interview after FOX reported the following:

“President Trump has deported fewer illegal Mexican immigrants in 2017 than President Obama did during the same amount of time for 2017, according to data from the Mexican government. Roughly 152,000 Mexican nationals were deported from the U.S. between January and November, Bloomberg reported, citing data from Mexico’s Interior Ministry. More than 200,000 were deported between January and November of 2016.