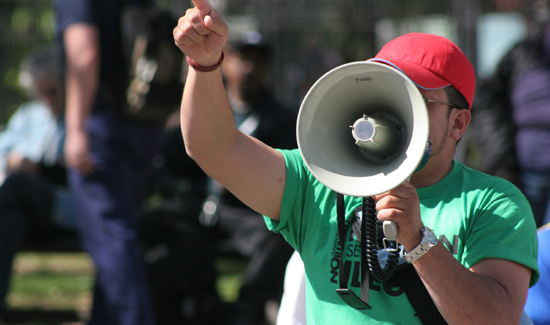 Police officers and supporters gathered in Hollywood, California, over the weekend to show support for law-enforcement officers nationwide.

“There’s something weird and scary going on right now – police are being assassinated,” said demonstrator Annie Bergin, 34, of Los Angeles, who held up a “They bleed blue” poster. “I’m here to show that I strongly support the LAPD and law enforcement officers everywhere who risk their lives each day to keep us safe.”

“This is just the beginning of a nationwide campaign,” said Jerretta Sandoz, vice president of the 10,000-member Police Protection League. “We’ve reached out to police unions in New York, Chicago, Atlanta, Houston and many other cities, and they are all on board.

“Now, we’re searching for a unifying catch phrase and symbol that will send this message: Enough is enough,” she said. “There’s just too much negativity throughout the country related to police work.”

“Police are being marginalized and demonized by a small segment of society with views that are magnified by the media,” Redican said. “This event is an attempt to mitigate that perception by showing that a majority of people understand that we are out there trying to keep the wolves away from our doors.”