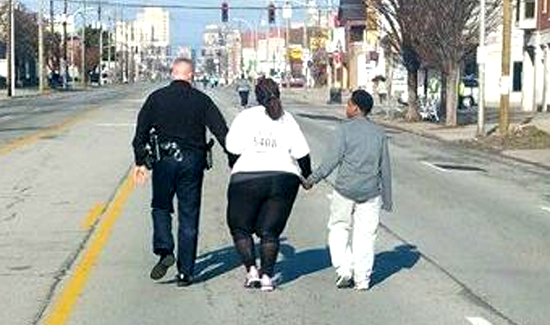 Obesity isn’t the kind of thing that many people want to talk about—and that’s part of the problem.

Military experts, public health professionals, and others have been sounding the alarm on America’s ever-expanding waistline, warning of obesity’s dire consequences.

But the battle of the bulge is an extremely tough fight, as anyone whose tried to drop more than 20 or 30 pounds will tell you.

And more than a nutritionist, an expensive gym membership, or a cross-training DVD set, the thing that people who are trying to change their lives and lose the weight need most is support.

This past weekend, in Louisville, Asia Ford, who used to weigh close to 500 pounds, decided to run a 10K road race and stay true to her mission of self-improvement. With discipline, commitment, and exercise, she’s managed to drop more than 200 pounds.

But during the road race, Ford was in trouble. Her legs were starting to go, and it looked like she wouldn’t be able to finish.

Noticing Ford’s distress, Louisville Metro Police Lt. Aubrey Gregory got out of his squad car and asked her if he could help.

Now, the photos have gone viral, and Gregory and Ford are actually restoring faith in humanity as a result.