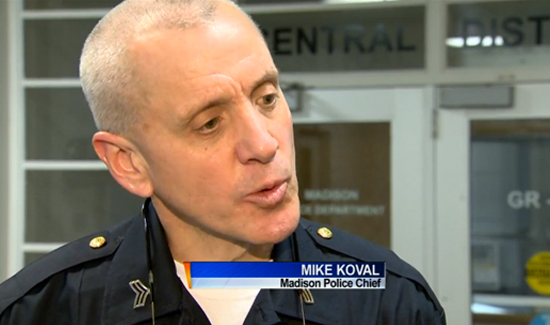 As city officials in Madison, Wisconsin, put together a special task force to review its police department’s policies and procedures, Police Chief Mike Koval says he is not willing to change the rules that guide when officers can use deadly force.

The Wisconsin State Journal reports that although Chief Koval says he welcomes the review of department procedures, he stridently opposes any changes to its policy for the use of deadly force out of concern for officer safety.

“It’s not going to be changed,” Koval said of the policy. “My officers are not going to be held to any kind of standard that’s dissimilar, or would put us at a greater risk of saf ety than any other police officer in the state of Wisconsin.

“I will not compromise officer safety. That is non-negotiable.”

Deadly force procedures have come under scrutiny in Madison following the March 6 shooting of 19-year-old Tony Robinson by a Madison police officer. Police say Robinson, who was unarmed, punched Officer Matt Kenny in the head and knocked him off balance before he was shot inside a Williamson Street apartment. Robinson’s death sparked days of peaceful protests and continued calls for changes to police policies in the weeks since he was killed.

When asked about Koval’s comments, Progressive Dane co-chair Matt Kozlowski said Madison police shouldn’t fall in line with what he called “cookie-cutter” state standards, and said he did not believe changing policies would necessarily mean greater risk to officers.

Officer safety does not trump the safety or constitutional rights of the citizen. That’s something that far too many of our police departments have forgotten. Either this chief gets with the program or he should be fired…that simple.