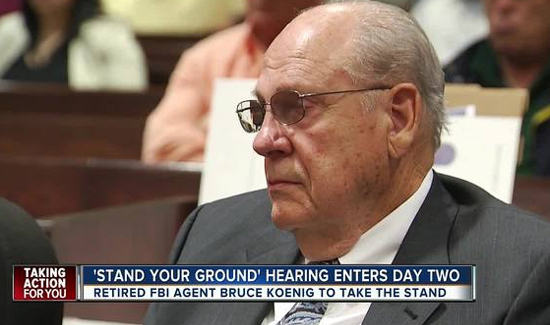 In court testimony today, Curtis Reeves (above) described the altercation in January 2014 that ended with his fatally shooting another moviegoer over texting, calling it at one point a “life-or-death struggle.”

“At that point, it was his life or mine,” Reeves testified, when asked by the defense why he shot Oulson that day.

If Circuit Court Judge Susan Barthle rules in favor of Reeves, he will receive immunity from prosecution and will leave the court a free man, with no criminal murder charges, under Florida’s “stand your ground” law.

Should she decide Reeves did not meet the law’s criteria during the encounter with Oulson, he will proceed at a later date to a criminal trial, where he may claim self-defense but may not utilize protection under the “stand your ground” law.

Prosecutors say Reeves provoked the confrontation, The Associated Press reported — which would exclude him from protection under the law.

Before the shooting, Reeves complained about Oulson’s use of his phone to movie theater employees, authorities said at the time. When Reeves returned to the theater, the argument escalated.

Witnesses told police that Oulson threw a container of popcorn at Reeves before being shot, police said. Oulson’s wife, Nicole Oulson, was also shot, in the hand. She told ABC News in 2014 that her husband was texting their babysitter, who was watching their young daughter.

Reeves testified today that he and his wife were seated behind the Oulsons. During previews before the movie, Reeves said, he waited 15 seconds to 30 seconds before asking Chad Oulson to put away his cellphone. Reeves said Oulson responded with “Eff off or get the eff out of my face.”

Reeves said he saw Nicole Oulson reach over and talk to Chad Oulson, so he sat back to see what would happen. When the cellphone remained out, Reeves testified, he went to speak to theater management. He said when he returned to the theater, Chad Oulson gave him a “stare.” Reeves said that he noticed that Oulson did not have his phone out, so Reeves apologized in what he called a “goodwill gesture.”

“I said, ‘You’re not on your phone. Sorry I involved theater management,'” Reeves said.

As he was sitting down, though, Reeves said, Oulson stood up quickly, turned around and “was just being loud.”

“When I looked up, he was coming over the seat at me, across the front of where my wife was … and I was hit in the face,” Reeves said.

Reeves said Oulson hit him over his left eye, knocking his glasses to the side of his head.

“Everything was blurry,” Reeves said. “I was kind of dazed. I was disoriented. I was trying to get my thought processes back together as to what happened, because it was so unexpected.”

Reeves said he could see Nicole Oulson trying to hold back her husband.

“I realize I’m trapped,” Reeves said. “I can’t get up. I can’t get out. He’s right in front of me. And he’s trying to come over the chairs.”

Reeves said that at some point he reached for his .380 semiautomatic handgun, which was in his pants pocket.

“He was suddenly right in front of me … looking down at me, and he was yelling,” Reeves said. “He was reaching for me.”