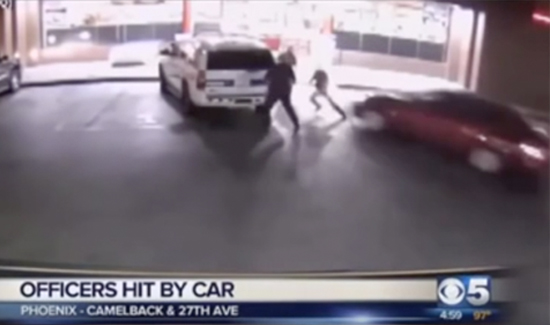 A car in Phoenix, Arizona, deliberately ran into three police officers, their SUV, and a gas station. The driver, Marc Laquon Payne, faces three counts of attempted murder along with a slew of other charges.

Three officers with the Phoenix Police Department were standing outside a gas station convenience store around 1:45 a.m., just after they investigated an unrelated assault case, Public Information Officer Sgt. Jon Howard told ABC News. It was the first day on the job for one of the officers, so they were discussing the incident they had just investigated. Howard said.

The video shows a red sedan accelerating from the opposite end of the parking lot and attempting to run them over before crashing into the store.

The suspect struck two of the officers before crashing into the squad car and then into the convenience store, causing “extensive” damage, police said. The video shows one officer remain on the ground next to the squad car after he was hit, while another officer is seen being thrown in the air by the impact of the crash. The third officer was able to jump out of the way, police said.