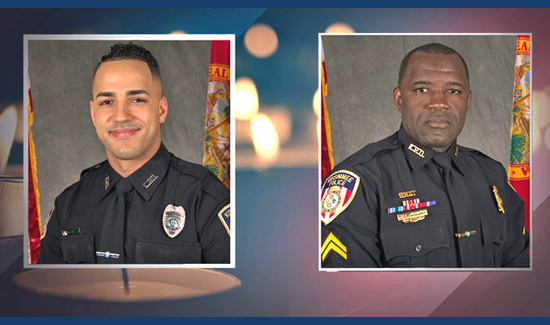 Hours before he was arrested in the shooting deaths of two Kissimmee police officers Friday night, Everett Glenn Miller posted photos online of a home and the tall grass surrounding it.

“I Found My Castle,” he wrote just before 6 p.m. “All guards have desserted. [sic] I have to reinforce my castle. Send gold & iron.”

Less than six hours later Miller, 45, was under arrest in a Kissimmee bar, accused of shooting two police officers on neighborhood patrol. Both officers died of their injuries.

Miller was with two other people near Palmway and Cypress streets when Kissimmee Officer Matthew Baxter (above, left) approached them to investigate a report of suspicious people.

Police have released few details about what happened next. But a “scuffle” broke out, said Kissimmee Police Chief Jeff O’Dell; it ended with Baxter and Sgt. Richard “Sam” Howard (above, right), who came to help him, shot.

Miller is in the Osceola County Jail facing charges of first-degree murder, resisting arrest without violence and illegally carrying a concealed weapon. Attempts to reach some of his family members and others who know him were not successful Saturday.

The other two people were questioned but not arrested, police said.

He apparently spent the early hours of Friday on Facebook, making nearly 30 posts. About 20 of them were published between 1 a.m. and 6 a.m.