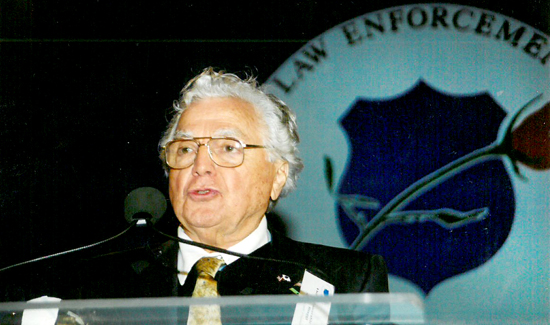 Mr. Biaggi joined the New York City Police Department in 1942 and went on to serve with great distinction for 23 years. At the time of his retirement and for many years later, he was the most decorated police officer in New York City history. In his 23 years on the police force, Mr. Biaggi was injured 10 times in the line of duty, and he received 28 heroism commendations, including the Police Medal of Honor for Valor—the Department’s highest award, given for extreme acts of courage. He retired in 1965 as a Detective Lieutenant. In 1968, Mr. Biaggi was elected to serve in the United States Congress, where for the next 20 years he was law enforcement’s most vocal and effective voice on Capitol Hill. In 1984, Mr. Biaggi formed the NLEOMF and his legislation to have a national monument built in honor of America’s law enforcement officers became law that same year. His dream became a reality when the Memorial was dedicated in 1991. Today, that Memorial stands proudly in historic Judiciary Square in Washington, D.C. and bears the names of 20,538 law enforcement officers who died in the performance of duty.

“Our nation has lost a man of great courage, compassion and achievement,” declared NLEOMF Chairman and CEO Craig W. Floyd, who also served as Mr. Biaggi’s legislative assistant for 10 years. “Through a life devoted to public service, Congressman Biaggi touched countless lives in a very positive and meaningful way.”

In 1998, Mr. Biaggi received the Memorial Fund’s Distinguished Service Award. In accepting the organization’s top award, he said, “I am a recipient of an award that is extremely significant, probably the most significant award I’ve received in an entire lifetime of public service and law enforcement.”