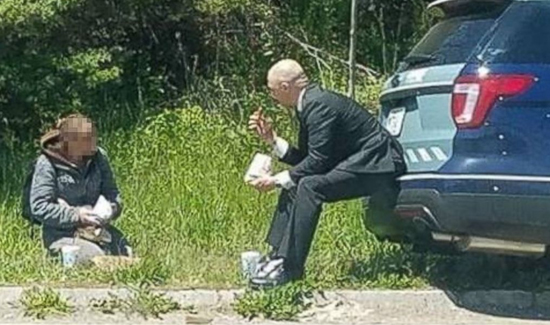 A homeless mom of four, down on her luck, never saw this one coming.

While out on the street Tuesday asking for money, she noticed a Massachusetts state trooper driving toward her before he pulled over. Certain she was about to be cited for panhandling, she immediately offered to leave, authorities said.

Trooper Luke Bonin, however, had other plans.

“She was holding a sign and asking for help from anyone who would pay attention,” Massachusetts State Police said in a Facebook post. “Trooper Bonin continued to drive on – directly to a local establishment, where he ordered two meals. He returned to the woman, pulled up, and exited his cruiser. … Trooper Bonin told her, ‘I’m not here to kick you out.’ He then extended the two meals and told her to pick one.’”

The other meal was for Bonin, who was dressed in civilian clothing after leaving court.