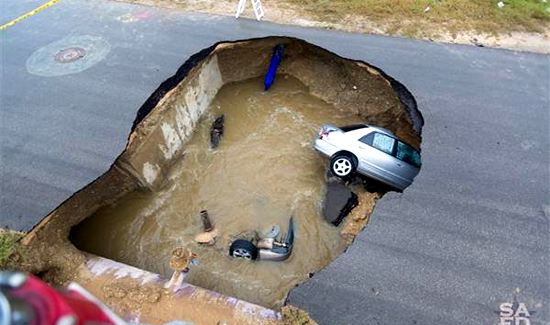 An unidentified man in the second vehicle was rescued by a civilian and transported to a local hospital with minor injuries, San Antonio Fire Chief Charles Hood said during a news conference.

The incident occurred on a two-lane road in a section of southwest San Antonio. In a statement, fire department spokesman Joe Arrington said crews responded to a water rescue shortly after 7:30 p.m.

What they found, Arrington said, was a broken 54-inch pipe and a pit measuring 10- to 20-feet deep that stretched the entire width of the road.

Robert Puente, president of San Antonio Water System, told reporters Monday that the pipe was near two construction projects — one that was completed last year and one that was still underway. Puente said it was unclear what caused the pipe to rupture.