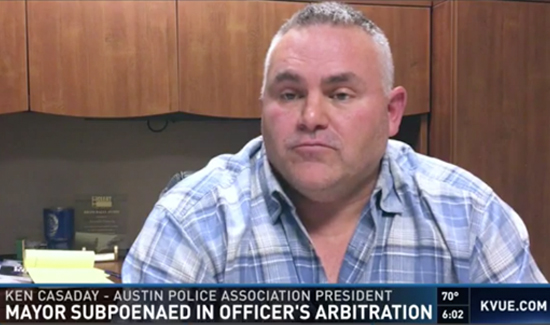 The Combined Law Enforcement Associations of Texas (CLEAT) is charging that the mayor of Austin, Steve Adler, violated Austin Officer Geoffrey Freeman’s rights to due process when they fired him after a fatal shooting of a naked and unarmed man last February. CLEAT has subpoenaed the Mayor to testify at an arbitration hearing for Officer Freeman who is trying to get his job back.

CLEAT went for the subpoena after the Mayor issued a press release announcing the creation of an anti-racism task force insinuating that the David Joseph and Breaion King incidents were one of the main reasons that a task force was needed.

The Mayor denied the allegation.

“I’ve never said the police department is a racist institution but what I will say is that there are institutional barriers to minorities in our community as there are in every community,” said Mayor Adler.

“I would ask you to be careful when there is an incident of not being too quick to condemn the police without due process,” the Lt. Governor told the president.

“When you ask for people to rebel and be disobedient, the people that end up suffering from that are local businesses and the police department who have to go out there and quell those issues,” said Casaday.