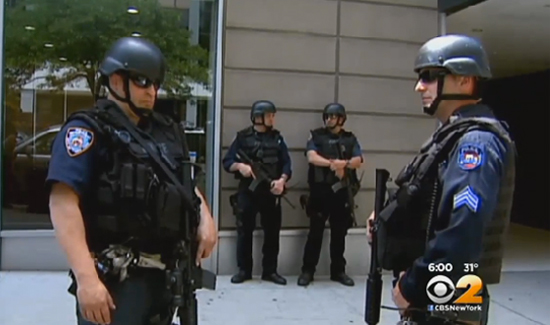 Think you’ve got a lot of equipment weighing you down when you’re on patrol? Try adding a long rifle or machine gun to your daily haul! That’s exactly what more than 600 officers assigned to the NYPD’s new Strategic Response Group—a new heavily armed unit that will focus on “disorder control and counter-terror—will be lugging around on their daily beat.

NYPD Commissioner Bill Bratton announced the creation of the unit at a breakfast given by the Police Foundation at the Mandarin Hotel, according to CBS News.

“It is designed for dealing with events like our recent protests, or incidents like Mumbai or what just happened in Paris,” Bratton said of the new unit. The commissioner said that while the anti-terror response put together after 9/11 was good, the upgrade is necessary to protect strategic locations, houses of worship and iconic landmarks. The changing face of terror threats, including Islamic State extremists and homegrown threats such as October’s ax attack on police in Queens, make it necessary for a new NYPD response, Bratton said.

Previously, the NYPD responded to crises by deploying cops from local precincts, which Bratton said left the neighborhoods served by those precincts unattended.