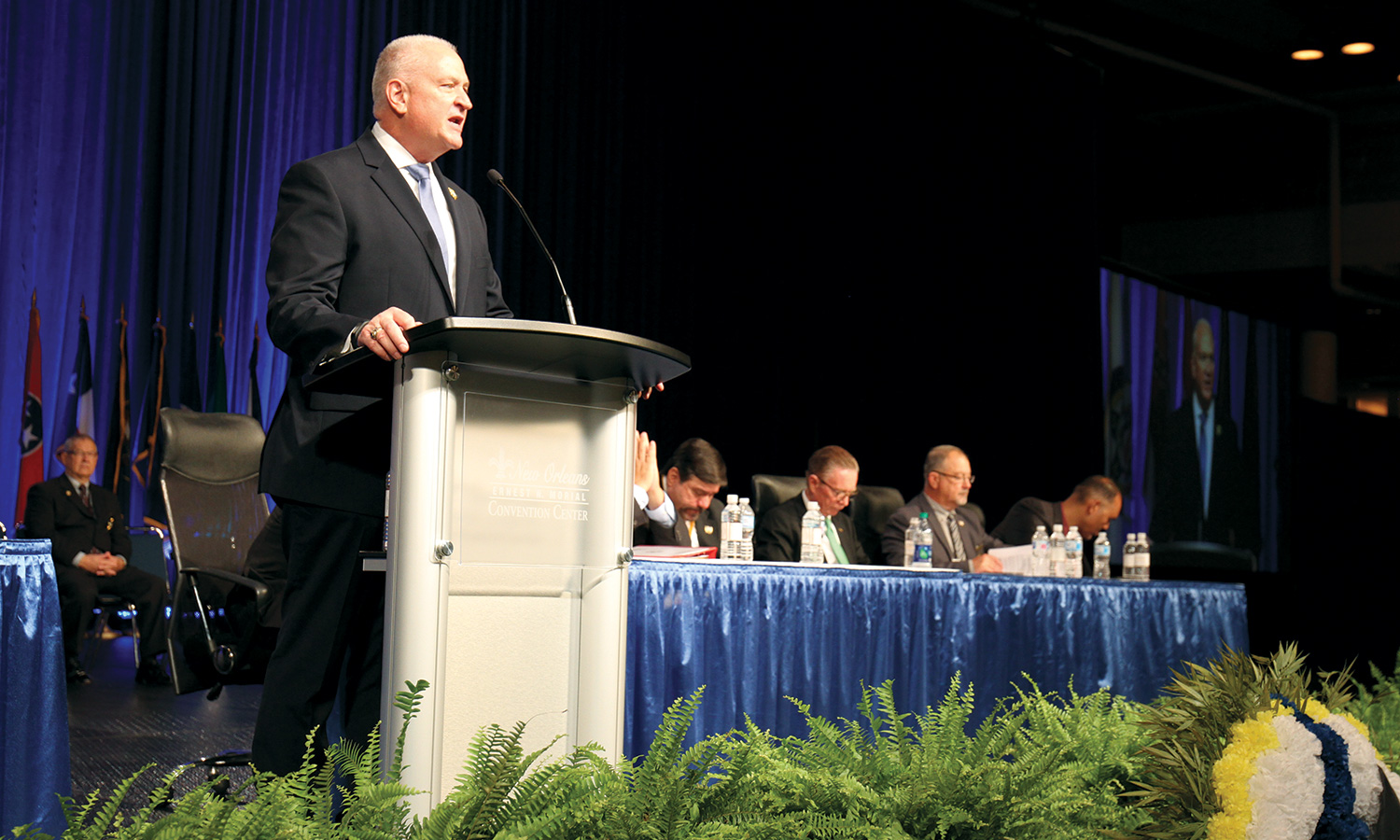 “To be elected president is a very humbling experience,” Yoes says of his initial reaction to his victory, in which he defeated Jay McDonald of the Ohio FOP with 59% of the vote. “But I know that I didn’t get here alone. I got here because of the support of a whole lot of people across the country who believed in me.”

Yoes also acknowledged those who came before him, saying that he’s “now walking in the footsteps of some dynamic leaders in this organization who brought us to where we are today.” And, indeed, he has some big shoes to fill. Yoes succeeds Chuck Canterbury, who led the FOP for 16 years before President Donald Trump nominated him earlier this year to head the Bureau of Alcohol, Tobacco, Firearms and Explosives. But given Yoes’ track record within the FOP, he is more than ready to take the helm.

That’s because, for Yoes, the path to the presidency was part of what he calls a “natural progression.” It started on the local level when he first joined the FOP in 1984 as a member of St. Charles Lodge #15. Within the lodge, he held nearly every elected position, including seven terms as lodge president. He was also active on the Louisiana State Lodge Executive Board for more than 22 years, 10 of them as president. From there, he was offered the opportunity to serve on some National FOP committees, most notably as chairman of the Education Committee, where he developed the organization’s popular Leadership Matters series along with a number of other initiatives that furthered his involvement on the national level.

Eventually, he found himself running for and being elected to the sergeant at arms position on the National Board in 2003, and a year later he became the National secretary, a role he has held for the past 14 years and “a job that I absolutely, totally enjoyed and loved,” he says.

This long history of leadership gave Yoes the advantage of “truly understanding the dynamics of the organization at all levels,” he says. His journey of rising through the ranks allowed him to build trust and confidence with members in the 2,400 lodges across the country, providing him a solid foundation on which to run for president.

When he announced his candidacy, he wrote in his campaign statement that the FOP was at a crossroads: It could either continue to do things as it had for years or evolve to keep pace with the rapidly changing world. Wanting the latter, Yoes threw his hat into the ring and announced an ambitious 10-point action plan that outlined his holistic approach to bringing the organization to the next level.

“A lot of times when we’re comfortable, when we’re on top, we tend not to look and see what our opportunities are because we’re satisfied where we are,” Yoes explains. “I hope to challenge that, to push the envelope a little bit and force our members to ask the question, ‘What if? What if we looked at things differently?’ What I’d like to do is compete against ourselves. We have a great success record, but I think we could be so much more.”

His action plan is designed to take the organization out its comfort zone while strengthening all aspects of membership, increasing representation and, most importantly, creating a more inclusive leadership that ensures all voices from the local, state and National lodges are heard. By doing this, Yoes hopes to leverage the combined power of the FOP’s nearly 350,000 members to create a stronger unified voice that will speak out on behalf of all police officers nationwide, not just members of the FOP, on the issues affecting them.

“We need to stop allowing others to speak on behalf of what law enforcement does,” Yoes says. “No one knows what we do better than us, and we should be talking about the complexities of our profession and educating the public on who we are, why we are important and why we do the things we do.”

Giving law enforcement a more amplified voice is important because the profession is in a crisis. Society’s attitude toward men and women in uniform has grown increasingly hostile since 9/11, he says, noting that since then the prevailing view of officers has quickly gone from “public servants to public enemies.” This is made evident by the damaging rhetoric and negative publicity that has come out of a series of high-profile incidents in recent years, many of which have resulted in officers being punished and demonized for simply doing their jobs.

“If we allow all of this to continue unchecked, we’re going to find ourselves one day having the best and brightest moving on to other professions because it’s just not worth it,” he continues, highlighting how negative publicity is affecting recruitment, retention and the overall future of law enforcement.

Yoes believes the FOP can play a major role in turning the tide and changing the narrative by taking a more active part in it. In doing so, he says, officers will be more empowered, able to foster stronger relationships with the communities they serve and better equipped to navigate a world that’s quickly evolving under their feet.

“I’ve been around 35 years in law enforcement. I know the progression that I’ve seen just in those 35 years, and I can tell you it is changing at lightning speed,” Yoes says. “We need to take a holistic approach to what ails our profession and do it in a much more aggressive way, and in a way that’s different from what we’ve done in the past, because times are changing, and we need to change with them.”