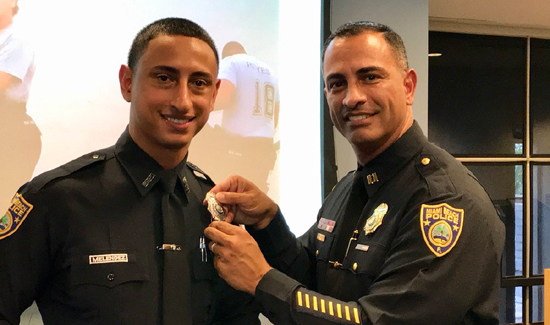 A Miami Beach man is facing criminal charges after he created a parody account purporting to be Ernesto Rodriguez, a spokesman for the Miami Beach Police Department. The defendant, Ernesto Orsetti, is charged with impersonating a law enforcement officer, a third-degree felony, according to a press release posted by the Miami New Times.

“Defendant falsely created and assumed the identity of the victim (active police officer/police information officer) via Twitter,” the police report says. “The Twitter account, @ernierodmb, had a marked Miami Beach police vehicle and a photo of the victim in uniform.”

“The behavior here was outrageous. It threatened to damage the reputation of our superb Public Information Officer, as well as the Miami Beach Police Department brand,” Miami Beach Police Chief Daniel J. Oates said in a statement. “We simply can’t tolerate such an impersonation, and I am glad Mr. Orsetti will now be held accountable.”

The police statement says that Orsetti was “engaging with local media, elected officials, and the community” as if he were Rodriguez. But it doesn’t offer any examples of how these communications harmed the reputation of the police department. Because the account was suspended, Ars was unable to review tweets made by the fake account.

Prosecuting someone for a parody Twitter account could do damage to the Miami Beach Police Department’s brand, too. Something similar happened back in 2014, when police in Peoria, Illinois, arrested a man for impersonating the town’s mayor on Twitter.

The man (Jon Daniel) sued the city with the help of the ACLU and argued that the arrest violated his First Amendment rights. Ultimately, the city was forced to pay $125,000 to settle the case.

“Hurt feelings do not free government from the responsibility of respecting Mr. Daniel’s freedom of speech and freedom from being arrested for that speech,” an ACLU attorney said after the Peoria case settled.