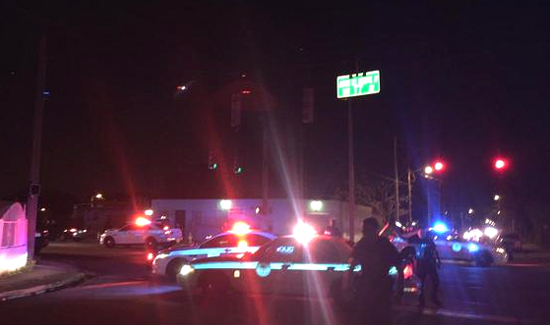 The Miami-Dade Police Department said late Monday that two of its officers were shot and wounded in an “ambush-style attack.”

The shooting happened around 10 p.m. at an apartment complex, according to a witness who spoke to CBS Miami. The officers were potentially undercover and in plain clothes, reports CBS Miami.

Miami-Dade Police Director Juan Perez said at a news conference that the shooting occurred an apartment complex around 10 p.m.

CBS News correspondent Manuel Bojorquez reports the two officers were conducting surveillance inside an unmarked car when they were targeted, according to the police department.

“Today we had a very scary incident. Obviously, we have two of our officers that work in the homicide task force, part of the gang unit, conducting an investigation near the Annie Coleman apartments,” he said. “The end result of their operation was that they were apparently shot in an ambush-style attack.”

The officers were rushed to Jackson Memorial Hospital in the back of a black pickup truck.

CBS Miami confirmed the two officers were in stable condition.

Police from multiple agencies set up a very large perimeter and SWAT was headed to the scene while fire rescue from Miami-Dade county and the city of Miami were assisting.

Bojorquez reports that police have yet to make any arrests, and Perez pleaded with the community for help in identifying the attackers.

“We need you now to step up to the plate, and if you know something, if you saw something, to say something,” Perez said. “These are the people that are causing havoc in our community and we’re not gonna stop, this is not going to deter us from doing our jobs. This is going to ignite a bigger fire in us to protect our citizens.”

Police say it’s unclear whether the suspects knew they were targeting police, but they are clearly dangerous and the area where the shooting happened is still being searched.

Authorities have not said how many people they are looking for at this time.

If you have any information that can help police, please contact Miami-Dade Crime Stoppers at (305) 471-TIPS.