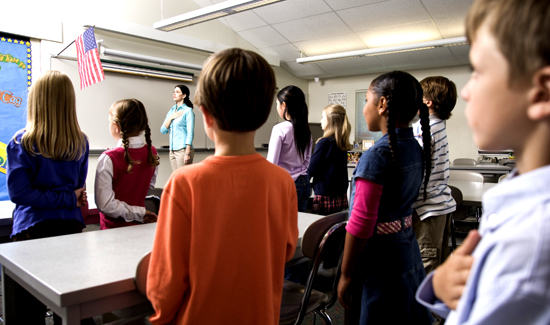 Some people are really into the Pledge of Allegiance.

Others, not so much.

In Miami, the head of a local police union is calling into question the character and allegiances of an assistant Miami Police Chief, alleging that she “refused to salute” the American flag during a recent ceremony.

The head of the Miami police union is seeking disciplinary action against the assistant police chief after she refused to salute the American flag while in uniform during a promotional ceremony.

“If she isn’t loyal to the United States of America, what country is she loyal and allegiant to?” Ortiz wrote in a testy letter to the chief of police.

“What makes you think she does not have allegiance just because of a physical action?” asked Local 10’s Glenna Milberg.

“Because she is denouncing the United States in full police uniform, and she is making a political statement by wearing that uniform,” Ortiz said.

I am a U.S. Marine Military Police Officer on inactive duty, as well as a retired City Police Officer from the North Shore of Chicago. I don’t think this Assistant Chief of Police could have been more obvious of her Disregard for the U.S. Flag than this Video shows. I also noticed that one of her Coworkers from the far end of the first rank was a bit hasting in lowering his hand from his heart before the Pledge was completed. That being said, I believe she should be removed from her position until she can show leadership, not disrespect, to the Department!