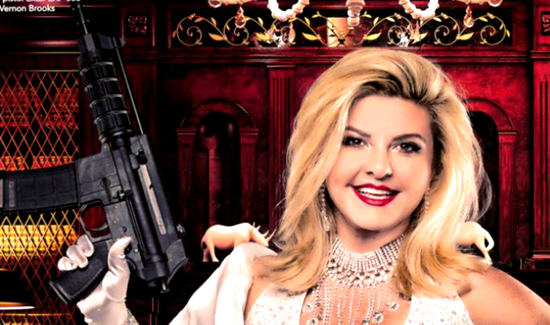 In some parts of the country, the best way to get elected to public office is to line up with anti-government extremists like the Bundy clan and their merry band of snackless freedom fighters.

Like a lot of entertainment personalities, Fiore is an infotainment industry’s wet dream, because almost everything she says is completely insane, which generates a lot of talk on Facebook and the like.

She recently managed to stick her entire foot in her big mouth when she said publicly that she would shoot and kill any law enforcement officer that dare drew his or her weapon in her presence.

Now, of course, she has to walk the kooky-talk back.

And what did she come up with?

She meant she would only try and kill federal law enforcement personnel, not local cops.

This is what happens when the truly stupid give fake apologies.

The reason she’s on the hot seat is that police officers called her out on her B.S.

Now she’s making vague threats along with her fake apology.

“Police in this state know me and know me well so for them to ever just jump off the bridge and go, ‘Oh, she’s anti-cop,’ like really?” she said. “I’m sorry, but they better check themselves before they wreck themselves.”

Does that sound like a state legislator, or a ditzy high-school sophomore?

Remember, people, there are a lot of bad combinations out there. But extreme stupidity combined with entitlement is as bad as it gets.