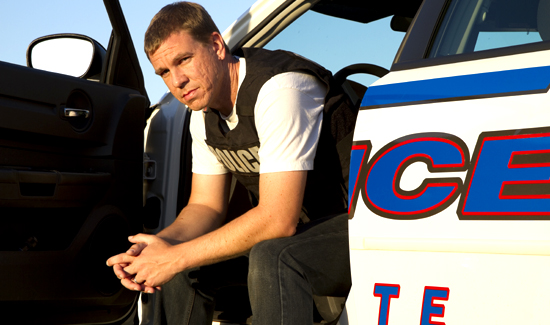 Via The Wall St. Journal:

Officer Brian Leatherwood thought the elderly woman was alone and needed medical help when he responded to a routine call for assistance one 2012 night in Knoxville, Tenn.

He heard yelling in the kitchen and went to investigate when a man rushed out and began beating him. A minute later, blood was pouring from the policeman’s head and his assailant, whom he had shot twice, was dying on the living-room floor.

“I went to work that Friday in a clean, fresh uniform and nothing wrong,” Officer Leatherwood said. He got home the next morning looking like “Frankenstein,” with “100 sutures in my forehead and the top of my head.”

Four years have passed since the shooting of the mentally ill man, which an investigation concluded was justifiable. The 47-year-old veteran officer is still prone to mood swings, intense headaches and short-term memory loss as a result of the encounter.

Much of the national debate has focused on videotaped police shootings of civilians, mostly minorities, prompting calls for more body cameras and changes in training and de-escalation techniques. The International Association of Chiefs of Police, one of the world’s largest organizations of police executives, recently offered an unprecedented apology for the profession’s role in “society’s historical mistreatment of communities of color.”

At the same time, public officials, including President Barack Obama, have voiced support for police, and some polls show Americans’ respect for officers rising. Much attention goes to police killed in the line of duty.

I’m not sure what Barack Obama the Wall Street Journal is referring to, but from where I stand, he’s done more to incite violence against officers through his narrative, than any President in modern history…..

Agreed! Obama has received BLM at the White House- this organization propagates the “Hands up/Dont Shoot” LIE of Ferguson. He has shot from the lip calling the lawful act of a police sergeant “stupid.” Has he EVER been to the Memorial for Police Week?
WSJ is wrong…Obama is no friend of the American police.