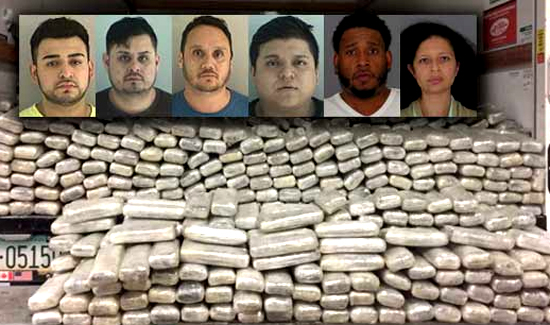 During a Wednesday morning press conference, Jones said the suspects transported the pot in a semitractor-trailer. The pot came from Mexico and was stashed and “hidden well” inside of the walls of the vehicle, investigators said.

“It took them about six hours to get the dope out of the back of the tractor trailer and into the U-Haul. We sat there for six hours and watched,” said Tim Reagan, Resident Agent in Charge of the Cincinnati office of the DEA.

The sheriff said the drugs came from Mexico, and the arrests stemmed from a month-long investigation.

Six people were arrested, four in connection with the initial seizure and two in connection to a follow-up search warrant at a Cincinnati-area home.

Jose Antonia Santiago-Razo, 32, Brandon Guijosa, 19, Miguel Alberto Trillo, 38, and Oscar Paz-Diaz, 20, were arrested, and each charged with possession and trafficking of drugs. They were found in possession of around 400 pounds of marijuana, officials said.

Jones said one of the men had been deported twice in the past.

“He was just deported in October. Probably no sooner than when we dropped him off that he was right back, probably within a week selling poison,”Jones said.

Officials said they found around 200 additional pounds of marijuana at the home.