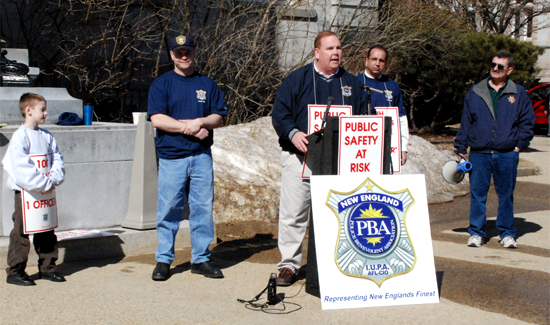 Jerry Flynn, the association’s executive director, told the Boston Herald his organization wanted to draw attention to the President’s role in what some police perceive as a “war on cops.”

“Let’s face it, [there have been] eight people killed in a nine-day period, eight police officers, and his silence up until recently has been deafening. And the real sad part of this — and when I went to the White House in the first term with Joe Biden — he said to me that he would be the voice of law enforcement. Well, as much as I love and adore Joe, his voice has been silent as well. So it’s not an Obama problem. It’s an administration problem.”

“This is a horror show. This is an epidemic of lawless people trying to kill police officers for no apparent reasons. Case in point is the lieutenant who was pumping gas in Houston. Over 7,000 people were at that church, and where was he [Obama]? Why wasn’t he there instead of a unity breakfast?”

“He’s got a new attorney general. What’s her agenda? What is her message going to be, that she’s actually putting forth? I don’t know the answer to that question. But certainly, what he’s doing now, what he hasn’t done now, has been supportive of those in law enforcement.”

Thank you thank you thank you for your opposition to Obama’s policies towards policemen. Out here in the “real” world we Americans are fed up with this crazy agenda of his. He is creating this climate of hatred for our police and he is doing it on purpose. You might know Boston and New England would be the ones to speak up. Our police are doing an ooutstanding job under these circumstances. Sharyn