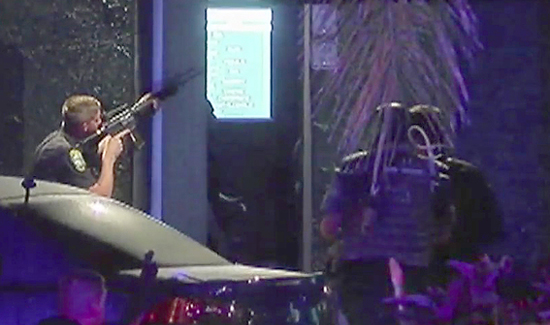 Nearly half of those killed in the Pulse nightclub shooting died where they were dancing, without a chance to react or run for help.

Thirteen died in the bathrooms waiting for help during the three-hour hostage situation.

The revelations are part of a newly released 78-page presentation Orlando Police Chief John Mina has given to about 10 police groups around the world to discuss how his department responded to the June 12 shooting — and what they learned.

The report, obtained exclusively by the Orlando Sentinel, has the most comprehensive timeline offered by police of the incident thus far and also includes diagrams and still photos from body cam footage showing officers in their initial confrontation with gunman Omar Mateen.

One of the questions not addressed in the presentation is if any of the victims were struck by friendly fire. Mina said Wednesday that he doesn’t know if any civilians were hit by police gunfire.

The presentation notes 38 people died inside the nightclub, including 20 on the dance floor, three on stage, one in the front lobby and one out on the patio.

Nine people died in the north bathroom, where Mateen was barricaded for a large majority of the standoff. Four died in the south bathroom.

The remaining 11 people died at the hospital or at triage areas set up outside the club during the shooting.

Orlando’s police department has been criticized by some survivors and families of the victims for its choice to not use explosives to breach the club until 5:02 a.m., leaving those in the bathrooms injured and pleading for help for hours.

The department has consistently said it did not go in until then for fear that hostages would be harmed. Mina made the decision after Mateen said he strapped bombs to people in the four corners of the club. The timeline says Mateen told police at 2:48 a.m. that he was wearing a bomb vest and “had a vehicle in the parking lot with enough explosives to take out city blocks.”

No explosives were found in the club.

The presentation includes self-assessments and ways the department might approach things differently in the future.