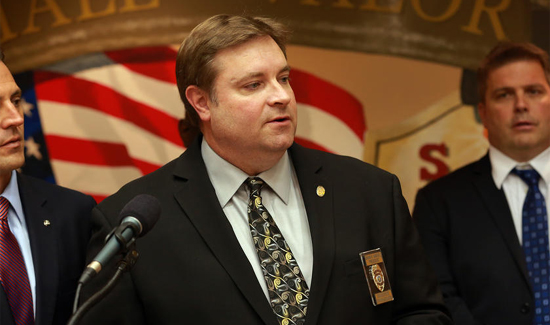 Via The San Diego Union Tribune:

Despite recent compensation increases and stepped-up recruiting efforts, the number of officer vacancies has increased from 170 to 207 since October.

And things look even bleaker moving forward, with applications down 36 percent over the last two years and just over 600 of the department’s 1,832 officers eligible to retire in the next five years.

“We need to create new solutions to address these unmet challenges,” Brian Marvel, the labor union president, told the City Council’s Public Safety Committee on Wednesday. “It’s time that this committee, the City Council and the mayor provide some straight talk for the citizens of the city and the officers within the Police Department.”

The council in 2012 approved a five-year plan to increase the number of officers by 300 in San Diego, which has historically had fewer officers per capita than the nation’s other large cities.

“Simply put, we are going in the wrong direction,” Marvel said.

And despite San Diego’s low crime rate, the vacancies have had an impact, Marvel said.

There is less proactive policing, response times are longer than if the department were fully staffed and investigators are overwhelmed, he said.

In addition, Marvel said investigative units are being eliminated to augment patrol divisions. For example, the department’s Centralized Auto Theft Unit was essentially disbanded, with their duties reassigned to area station investigators.

These changes have been compounded by the department’s need to cope with a surge of calls related to mental illness and a spike in the number of homeless.