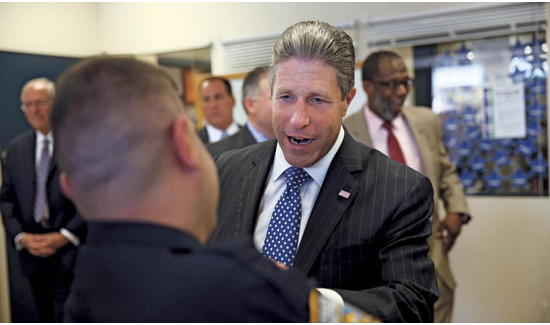 Here’s an excerpt from the great profile Newsweek did on NYC PBA President Patrick Lynch:

“…Patrick J. Lynch heads the Patrolmen’s Benevolent Association, a union for more than 20,000 beat cops in the city’s five boroughs (sergeants, captains, lieutenants and detectives have their own unions). Lynch doesn’t just represent cops; he represents what it means to be a cop in an America where guns are legal and restraint is rare, a nation still fighting a drug war in which the enemy may be a Mexican drug lord or a teenager smoking a joint, still dealing with racial animosities we’d supposedly transcended in 1968…or was it 2008? His officers are the brethren of those in Ferguson, Missouri, as well as the members of 18,000 other nonfederal law enforcement agencies across the nation, men and women who on any given day may have to deal with terrorists, illegal aliens, meth cooks, crazies, messianic cultists and protesters in Guy Fawkes masks. All these officers are charged with the impossible task of upholding a broken social contract.”