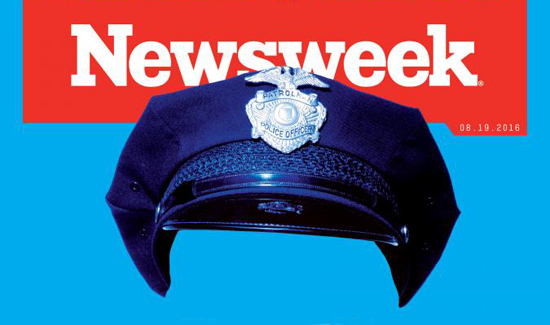 Editor’s note: This is worth a read. The report, titled “The New American Cop: Smarter, More Diverse and Scared,” is written by Newsweek reporter Max Kutner. Although it starts out on a negative, overall it is a very sympathetic look at what officers are going through in these difficult and challenging times as they serve and protect their communities. Kutner comes away from his research with a great respect for the profession overall. There’s several interesting videos, too, on the Newsweek website.

In police departments across the country, a growing number of officers have more in common with Jones than with those who make headlines for killing black men. Although sometimes portrayed as a white occupying army at war with black civilians, American law enforcement has never been so diverse. In 2013, around 27 percent of the country’s 477,000 sworn local police officers were racial or ethnic minorities, up from 15 percent in 1987, according to the Bureau of Justice Statistics. There are now more female cops than there were decades ago—around 12 percent of local police—and more openly gay, lesbian and transgender officers as well.

Today’s police are also entering the force with higher levels of education and more special abilities, such as foreign language skills and technological expertise. Once they join a department, they often receive better training and equipment than at any other time in history. And regardless of what the public has seen in shocking videos of shootings, today’s cops have been trained to act with more sensitivity and restraint than previous generations of officers. The common refrain among those on the force is that they are guardians, not warriors.

The murders of officers in Dallas and Baton Rouge are part of another troubling trend that has some political commentators claiming there’s now a “war on cops.” A July report by the National Law Enforcement Officers Memorial Fund, a nonprofit that maintains the national monument to fallen officers in Washington, D.C., showed a 78 percent spike in firearms-related officer fatalities this year compared with 2015, with 32 shooting deaths of police sinceJanuary 1 and a 300 percent jump in ambush killings. Demonstrators have upended or tramped squad cars in Ferguson and Baltimore, and in New York City they have chanted, “What do we want? Dead cops! When do we want them? Now!”

Not only are police increasingly having to protect people who despise them, but their jobs have expanded too. As social services in the United States fail and threats such as terrorism and mass shootings grow, officers are having to step into new roles, whether they’re prepared for them or not. “This is the most challenging time I can remember,” says Santa Barbara County, California, Undersheriff Bernard Melekian, a law enforcement veteran of four decades. “The public demand and the public scrutiny are more than I’ve ever seen.”