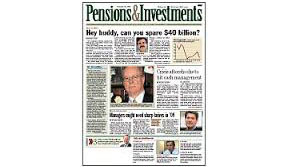 Editor’s comment:
When you take stock of these numbers – $3.1 trillion in cash and securities in public sector pension funds, it’s no wonder Wall Street has their greedy hands trying to steal your pension funds.  $3 trillion! That’s a big pot of moneyAnd it’s yours. You earned it. Don’t let them take it away

The asset total was the highest since the survey was first conducted in 1968; total assets topped the $3 trillion threshold for the first time in the third quarter, at $3.061 trillion. The public plans reaped $165.6 billion from investment earnings in the fourth quarter.

In total contributions, 73% were provided by government sponsors and 27% came from employees. Government contributions totaled $27.6 billion, up 23.9% for the quarter and up 4.4% for the year. Employees contributed a combined $10.4 billion, a 25.5% increase from Sept. 30 but only 0.1% above the end of 2012. Contributions generally are cyclical, Ms. Becker-Medina said, more often made in the second and fourth quarters, which explains the large fourth-quarter increases.