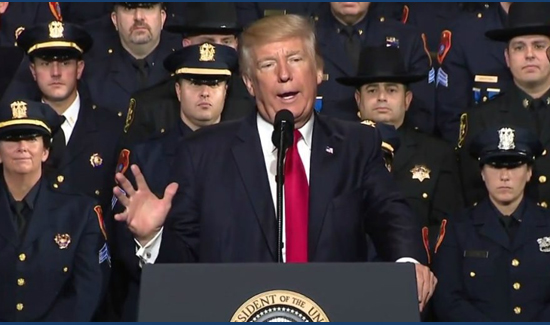 The New York Police Department released a statement on Saturday reiterating their use of force policies after President Donald Trump suggested police officers be more rough with their suspects during a Friday speech to invited law enforcement officers.

In a statement emailed to HuffPost, the NYPD called suggestions for police officers to use alternative standards for use of force “irresponsible” and “unprofessional.”

“The NYPD’s training and policies relating to the use of force only allow for measures that are reasonable and necessary under any circumstances, including the arrest and transportation of prisoners,” a spokesman for NYPD said.

“To suggest that police officers apply any standard in the use of force other than what is reasonable and necessary is irresponsible, unprofessional and sends the wrong message to law enforcement as well as the public.”

While speaking about the administration’s efforts to take on international gangs to law enforcement officers at the Suffolk County Community College in Long Island, New York, Trump joked that officers should be rougher with suspects and suggested letting them hit their heads on police cars.

“When you see these thugs being thrown into the back of a paddy wagon, you just see them thrown in, rough, and I said, ‘Please don’t be too nice,’” Trump said.

A NYPD spokesman told HuffPost that no one in their department attended Trump’s speech on Friday.