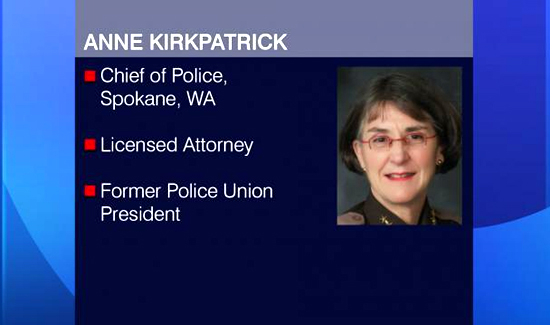 The incoming police chief in Oakland will reportedly receive the largest base pay in the city’s history.

Incoming Chief Anne Kirkpatrick will earn a base salary of nearly $270,000.

SF Gate reported recently that with total compensation and benefits her salary could reach $299,675. The paper also reported that the two and a half year deal was approved by the city council on Tuesday.

“What I will tell you is that I am a leader,” Kirkpatrick said at a previous news conference announcing her appointment, listing qualities Oakland wanted in its police chief.

“Those character traits are not gender-based. Those are leadership-based.”

Kirkpatrick will be Oakland’s first woman police chief. Kirkpatrick starts on February 27, according the SF Gate.

I worked near Kirkpatrick in Spokane. She’s good though she trusts her direct reports too much.