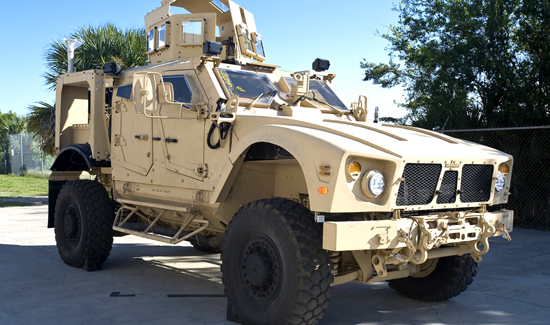 Police militarization continues to be a controversial topic.

Liberals and libertarians contend that armored vehicles, rocket launchers, and other tools indicate a troubling trend whereby the state can create the impression that it considers the citizenry an ever-present security threat.

But many law enforcement officials and others say the military gear and vehicles are necessary to keep cops safe when they perform dangerous tasks like serving high-risk warrants, stand offs with armed suspects, and other emergencies.

“We’ve seen how militarized gear can sometimes give people a feeling like there’s an occupying force, as opposed to a force that’s part of the community that’s protecting them and serving them,” Obama said during a speech in Camden, New Jersey, yesterday.

“It can alienate and intimidate local residents and send the wrong message,” he said.

“There is a big difference between our military and our local law enforcement, and we don’t want those lines blurred,” Obama has said in the past.

Needless to say, the law enforcement community has a lot of hostility towards the Obama White House and suggests the move to restrict military equipment and vehicles is pure politics and will likely out police officers at risk.

David A. Clarke Jr., the sheriff of Milwaukee County in Wisconsin and something of a “rock star” in conservative circles suggested that the President doesn’t understand the nuts and bolts of public safety operations because he’s from the “academic elite.”

“He is from that academic elite,” Sheriff Clarke said. “They sit in those ivory towers not understanding what goes on at ground level in these often difficult situations.”

The politicians would have an argument in saying it gives a perception that the use of these type vehicles make it seem we perceive the typical citizen a threat IF AND ONLY IF these vehicles were used as standard patrol vehicles. Since the times we actually do use these vehicles are when there is a clear threat to officer safety (dangerous warrant service, riots, barricaded armed suspects, etc…), what the politicians are instead saying is that if you are in law enforcement, you are not considered to have any human value, therefore you are not permitted access to protection from death or serious physical harm. We don’t make exorbitant salaries, work far more hours than the average citizen, through holidays, storms, confronting so many horrors that evil can commit to a person, yet we are supposed to suck it up and be like superman, because the bullets will obviously bounce off us.

I suggest one of our Law enforcement magazines begin logging any and every incident where a politician makes a statement suggesting we don’t deserve to be protected, and posting a newsletter or article prior to Election Day so that those whom it impacts can make their collective voice heard in the ballot box.

We may be comparatively small in number on the grand scale, but considering our sense of civic duty, I KNOW we must be close if not at 100% regarding voter turnout. I’m also equally sure the other branches of Public Safety would also have our backs on Election Day as well, since every person I know in Police, Fire, EMS, and Dispatch are active voters.

We need to effect change in leadership of the present leadership refuse to lead.

God bless you all, and be safe!

Honestly this is a stupid move, with the ever increasing threat of terrorism police gear has to evolve and yes take on a more militarized appearance. Police departments are in fact a paramilitary organization. What are police officers going to do when they encounter a terrorist group or an individual with high powered, military style equipment, of which is not hard to obtain on the black market? Case in point just look at the famous bank robbery in Los Angeles, where the LAPD was severely out gunned, because the two bank robbers had amour and high powered rifles, with round that were capable of penetrating an engine block. The LAPD’s side arms where useless against these two individuals, officers were killed and many were wounded, before the LAPD was able to obtain some high powered rifles themselves from a local gun store.

When events like this happen we can’t call in the military to take care of it, it is not their responsibility, it is the responsibility of the local, county and state police department to handle these situations. A more straight to the point note, take the riots in Baltimore the national guard was called in and they brought their military gear and vehicles, so what really is the difference?

To me, if you want to avoid police officers don’t commit crimes or even act like you are going to. If you don’t do anything to get a police officer’s attention, then they won’t pay attention to you. And on a more important note, I would definitely not call Obama part of the academic elite, just my opinion.