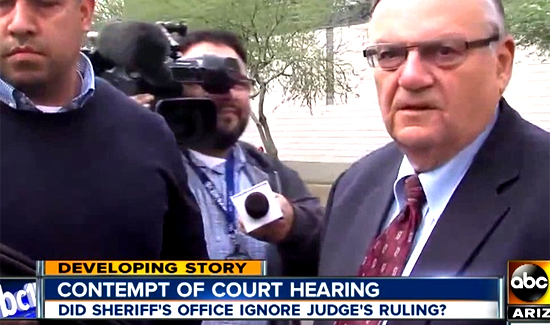 For those that have been following the trial of Maricopa County Sheriff Joe Arpaio, the big question this week was whether Joe’s underlings would make deals and testify against his boss or risk going down with the ship.

According to AZ Central: “A Maricopa County Sheriff’s detective backed up his boss in court testimony Wednesday regarding an investigation known as the “Seattle Operation” that somehow ensnared a federal court judge overseeing a racial-profiling lawsuit against the department.”

For those that aren’t following the case closely, Mackiewicz was expected either to make a deal and testify that Arpaio targeted the judge overseeing his contempt-of-court trial with a private investigation with a con man that allegedly provided the sheriff with CIA documents.

Mackiewicz testified partially (he said he couldn’t answer all the questions asked by counsel because that would get him in trouble at work) that Arpaio never specifically targeted the judge for investigation and retaliation.

Mackiewicz said it was all the private dick in Seattle’s idea.

Whether or not that’s believable is likely to answered as the case moves forward.