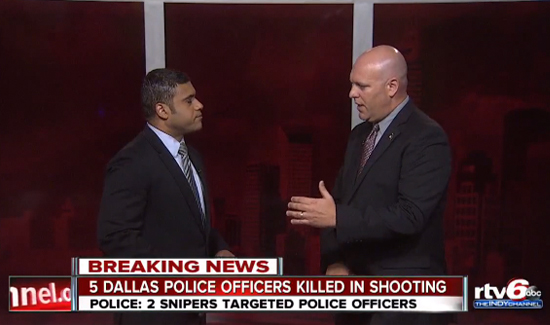 While many of us are wringing our hands trying to figure out what to do next, the Indianapolis FOP is demanding action. President Rick Snyder—pictured above, right—said the police union is calling on state lawmakers to create a “Law Enforcement Officers Protection Act” which would increase the charges against anyone attacking a law enforcement officer.

“It’s a new day in our country,” Snyder said. “There’s too many attacks on our police officers and the city and state must come forward and help protect us.”

“Over the past several years over 700 Indianapolis officers are assaulted every year,” Snyder continued. “These numbers are just staggering. For starters we are asking our own City-County Council to approve emergency funding to ensure that body armor is available for every on or off duty officer at all times.”

The Indy FOP has requested bullet resistant vests and helmets as well as trauma kits. While a community fundraising drive did raise enough money to outfit 1500 officers with the kits, Snyder said the funding has not been maintained. He estimates the cost of the kits and armor at around $2000 per officer or about $3.2 million overall—not a whole lot of money he says when it comes to protecting officers.

Indy cops are also demanding that the Department evaluate and update its training curriculum. They want more focus on protecting officers from ambush-style attacks, like the one that happened in Dallas.

The requests come as the mayor and council are working on the upcoming budget and are searching for ways to address a $50 million structural deficit.

“Our call is for our community and police department to be prepared, not scared,” Snyder said. “We should not should be responding to these rapid rise in violent attacks on our community out of fear. We should respond with a proactive model that’s well thought-out and planned with the safety of all our officers the top concern.”

Demands for action include:

Snyder is asking every law enforcement official in the country to support the effort.

“We need all the support we can get,” Snyder said. “Contact the Indianapolis elected officials I’ve listed below, identify your organization and your city and state and politely encourage them to appropriate emergency funding for the equipment we need. This is going to make a powerful statement and it will pave the way for you to demand the same in your jurisdiction. We will be happy to make calls on your behalf as well. Just let us know.

Here’s the important people to reach out to:

DETAILS ON OUR THREE DEMANDS

Action Item #1: The Law Enforcement Officers Protection Act
Indianapolis FOP calls upon our Indiana State legislators to move to enhance the Indiana Criminal Code for those who specifically target and attack police officers and/or their families because of the officer’s status or perceived status while on and off duty. Inclusive within this action would be the mandated reporting by Indiana law enforcement agencies of all assaults on officers.

Currently nationwide, only 57% of law enforcement agencies report assaults on officers to a national database. Therefore, the national yearly total is significantly underreported and prevents a complete picture of the violence toward police. The IMPD alone has averaged approximately 700 police officers assaulted annually for the last three (3) years. The department has a little over 1,600 sworn officers.

With standardized reporting federal and state resources can be better directed to areas of need and trends of violence can be better identified in the effort to educate our profession and the public while also preventing future assaults.

Action Item #2: Specialized Safety and Tactical Equipment
The Indianapolis FOP calls upon local City County Councilors and the Mayor to allocate emergency funding for additional specialized safety and tactical equipment for local police officers. The FOP specifically calls for the funding of emergency trauma kits, external tactical body armor with carriers, ballistic helmets and less lethal bean bag weapons system. In 2009, five Indianapolis Officers were fired upon. That number increased 37 in 2014. Since 2012, 89 Indianapolis police officers have been assaulted by firearms and 15 have been shot, two fatally. We are requesting the following:

Trauma Kits
In 2014, the Indianapolis Police Foundation, the Father’s House Church, the Indianapolis Colts, AnthemWellpoint and individual residents from the Indianapolis community rallied together and raised $150,000 to purchase 1,500 trauma kits for the IMPD. Since then, the trauma kits have been deployed on several incidents for citizens and officers alike, resulting in many lives being saved. The department is currently in need of kit contents and bags to replace used equipment and provide for newly hired officers in the upcoming year. Therefore, we call for the funding to purchase 200 complete trauma kits.

Ballistic Helmets
Recent high profile events and the ever increasing number of protests which have the potential for violence have demonstrated the need to equip every Indianapolis police officer with a personal protective ballistic helmet and face shield. This equipment can be quickly deployed by front line officers and first responder officers during armed conflicts as well as during violent incidents involving rocks, bottles and other objects being thrown at officers.

External Tactical Body Armor with Carriers
Frequent active shooter incidents and ambush attacks on police officers nationally and locally provide a compelling need to equip all IMPD Officers with supplementary tactical body armor with specialized carriers. The combined ballistic protection, additional specialized equipment storage and highly visible markings allow on duty officers to layer their protection while responding to a known in progress attack such as the Dallas, Baton Rouge and recent Indianapolis gun battles. Additionally, the availability of the equipment also ensures any off duty officers and plain clothes detectives can immediately deploy the protective gear which may be the only safety equipment at their disposal during an unexpected real time critical incident.

Less Lethal Bean Bag Munitions
Ballistic Less Lethal Bean Bag rounds allow specially trained officers to deploy powerful blunt impacts to subjects who are a threat to themselves. This specialized system allows officers to maintain time and distance from possible threats while attempting to resolve rapidly evolving situations which may include the use or the threatened use of weapons. Equipping first line patrol officers with this tool provides additional use of force options to our officers so that they may professionally assess and respond to applicable events such as those suffering a mental health crisis, narcotic induced delirium and other violent medical issues.

Action Item #3: Evaluate and Update Law Enforcement Training
The Indianapolis FOP calls upon local officials and those within the Law Enforcement profession to evaluate and update standard training curriculum to address ambush attacks, defend against elevated firearm assaults (sniper incidents) and respond to the criminal use of improvised weapons such as edged weapons, vehicles and explosives. Additionally, the FOP calls upon the Indianapolis Metropolitan Police Department to immediately increase the frequency and availability of patrol rifle training and certification courses.

I don’t think IMPD has thought this request for equipment all the way through. How about bullet resistant glass & Kevlar in every police owned vehicle??? How about drones sent to a call for service prior to the police officers arrival??? Put a rifle in every trunk in order to counter suspects long guns??? More helicopters??? Using unmarked vehicles to respond to certain calls for service??? Use of armor piercing rounds for police rifles against suspects with ballistic vests & helmets??? Etc.